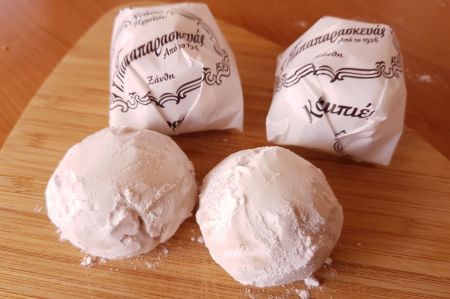 After crossing the Turkey / Greece border, we were once again caught in a heavy, but very short rain shower at Alexandroupolis, causing the water to evaporate rapidly under partial fogging on the still warm asphalt.

During a short stop, this picture-loving, friendly street dog begged for food, a Simit helped to bring along.

Some of the best moments during our travelling through different countries are shared with locals when discovering or learning unexpected tastes or menus, recipes or other local specials, so we did again when we heard of very special "kourambiedes" cookie from Xanthi, some sugar dusted almond and vanilla flavoured cookies that are a must on every Greek dinner table during the festive season, if it is Christmas time or Easter.

So on the way to Thessalonica we decided for a stop in Xanthi, just because of getting some of the original kourambiedes, which after some research, is just one of the origins of the cookie. Later we even learned, that the cookies differ from region to region, as do the recipes. Christmas kourambiedes are adorned with a single whole spice clove embedded in each biscuit on some islands, while on the island of Folegandros in the Cyclades they make a "psefto-kourabie" (meaning a fake Kourambie) and honey and plenty of cinnamon are used.

According to our culinary history these delicious cookies appear to have their origins in 7th century Persia, shortly after the use of sugar became relatively common in the region. The word Kourambie is derived from the Iranian and Azerbaijiani word "Qurabiya". They were then spread in Asia Minor and the name we recognize stems from the Turkish word "Kurabiye", which also means a sweet flour, butter and icing sweet.

Some argue that the Greek and Turkish Kourambieis are very similar, but as already mentioned, they differ already from region to region inside of Greece. The "arab" way of making kourambiedes includes almond flour, sugar, egg white, vanilla, margarine and pistachios and the cookies of course are usually served with tea. In Greece, kourabiedes are usually served with aromatic coffee and sometimes resemble a light shortbread, which contain whole almonds, a splash of brandy, Metaxa of course, vanilla and scented with rose water.

So called original ones from Xanthi, what we heard so far, are that much tasty because of a very creamy butter being used in the recipe and were single packed in paper without rose water, in other words they were dry, but very tasty cookies.

Another interesting fact we heard about is that at the turn of the 20th century the Kourambiedes were even banned from consumption, maybe because of the falling of the Ottoman Empire. But another arguments was, that authorities considered it a messy food, in reality (so others say) it was really banned because younger ladies did not have any baking talent. Nevertheless, these sweet cookies made their comeback with a bang during last years and whatever the recipe, kourambiedes are a must when travelling Greece. Just keep in mind that if you add more than two egg yolks in whatever recipe you choose then your cookies will become hard.

Sunny Alanya - rainy Ayvacik - then the ferry at Lapseki