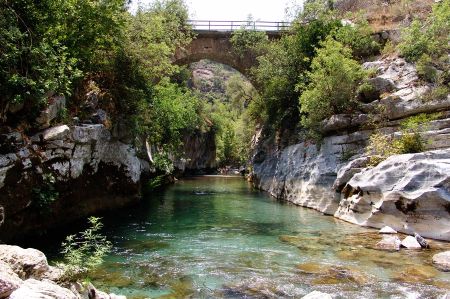 The source of the Dim River is about 35 miles from Alanya on the southern side of the Taurus Mountains, about 150 miles away from Konya.

Leaving Alanya to the east, you will find the Dim River flowing into the Mediterranean about 4 miles away from the town centre.
If you enter the Dim River Valley and follow the river to its origin, you will reach a small village called Dimalacami, where a beautiful waterfall forms the source of the Dim River.

In the early 1940’s the water of the river was most important for the economical growth of Alanya because the banana plantations were dependent on huge amounts of water during the dry summer. A little later, lots of orange plantations were added and more and more water was needed. Today the plantations of oranges and bananas are not as important for Alanya, but the Dim River still is. All along the river you will find lots of restaurants, some of them built on the river bed. There are also well known barbecue areas, good for relaxing during the hot summer days of July and August. During the summer, when the water level is low, the tables of the restaurants are placed in the water, so you can have your feet in the cool water of the river while eating out.

Apart from Turkish food, the Dim River area is famous for its trout. Lots of restaurants have their own trout farms, so they are able to serve fresh fish all year long.

During the hot summer time especially, lots of visitors, including Turkish people, like to go to the Dim Valley for a relaxing day away from loud and busy Alanya. Some restaurants offer lots of different alternatives to help you relax. For instance, there are pool areas, there is an Anatolian Village and there are areas for swimming in the river. But be warned, even in the hot summer, the water of the river is really cold.

About five miles away from the coast there is a big dam, which is being used to create electricity. This is used to store the huge amounts of water during the wintertime, which is used for producing electrical energy as well as for watering during the hot summer days. Because of the quick growth of Alanya, quite often there are electrical problems which, hopefully, can be solved when there is more energy available in the future. It will also be much easier to control the level of the water now.

The fact that some of the villages and restaurants behind the dam will be flooded is the price which needs to be paid for the quick growth of the Alanya area. Eating out at Dimcay will mean a new experience for you. Enjoy it.

It has taken much more time then expected but in the end it begun: Dim valley will be flooded. Right in time with the winter rain period the locks in the dam were closed and damming of the water could start. The heavy rain showers in December could quickly fill the bottom of the valley.

Little later, in the mid of January 2010, the water level behind the dam was already at about 16 meters of height and you can just guess the contour of some of the old houses at the former river bed anymore. Passing the new, still not finished road, leading to the spring of the Dim Cay, we had some really curious impressions when talking about the picnic zones were we spend couple of weekends and now watching them disappearing in the flood. But that’s life, as well we remembered how often there was no electricity and no water available in Alanya. Hopefully this problem will be solved by the help of the dam project.

What we really miss is the ancient bridge nearly at the end of todays water storrage. So often we were refreshing ourselves in the cold but absolutely clean water below the bridge, you see in the pictures. The water level of today is about 3 meters higher then the bridge construction.