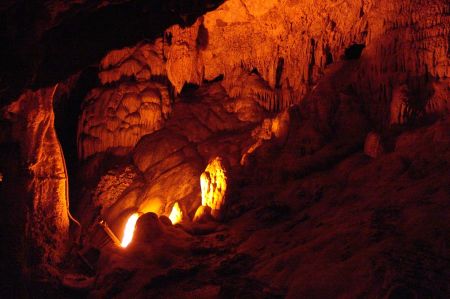 Turkey is in one of the first positions in the ranking of countries of owning the most caves and waterways below the surface. The number of caves in Turkey is calculated to be more then 40.000.

Research on caves, called speology, is becoming of more and more interest for the scientists. Small caves around Alanya belonging to the most important ones in Turkey.

Dim Cave is at a distance of 11 Km to the tourist centre of Alanya, which is mostly attracted by the European tourists. The Cave is at a high of 232 metres from the sea level and is at the western slope of 1.691 metres high Cebel Reis mountain. The Dim Cave is reachable both from Kestel and Tosmur and also from Dimçay Valley by asphalted roads.

This cave is a single passage about 360m long and between 10 and 15m wide, the visitor enters somewhere in the middle. First the passage towards the right is visited for about 50m, then the passage to the left for about 250m. The longer side ends at an underground lake, about 200m² and 17m below the entrance. After reaching the end of each side, the visitor has to walk back to the entrance. The cave shows numerous stalagmites and stalactites, is well developed and well lighted.

Dim Cave was known by the surrounding villagers previously. Some parts of the Cave were used as shelter by hunters and shepherds. This cave has first been investigated and measured by professional speleologists in 1986. After several years, it was brought to the show cave conditions and was opened for visits in 1998. Dim Cave, in this case, is the first cave business enterprise operated by private sector in Turkey.

Dim Cave is a natural cave. It was formed by the carbonic acid rich rain and snow waters running through the faults and joints dissolving the limestone rocks. Tectonic is also effective on formation and evolution of the cave.

Dim Cave had been developed along a major fault zone, running in the NW - SE direction on Cebel Reis mountain in the Middle Taurus Mountains. Lower part of the limestones are intercalated by shifts. At the end of this intercalation, at lowest part of the formation, (oldest strata) is shift, which is thin bedded, plate like, not solvable an not porous.

During blasting work for the construction of Alanya Harbour in 1948, engineers found the Damlatas cave. Today the cave is one of the town's most popular attractions. The cave has a constant temperature of 22-23 degrees Celsius and humidity level of more than 90 %. There are also stalagmites and stalactites which are several thousand years old. The climate in the cave is said to be therapeutic for those with respiratory problems, especially asthma sufferers. Doctors can prescribe visits to the cave and time is reserved every morning for their patients.

Damlataş Magarası is a relativ small cave with beautiful calcite formations, located right at Cleopatra Beach in the centre of Alanya. A large cavern with a size of 13 x 10m and a height of 15m is used for Speleotherapy. The humid air is supposed to be good for fighting asthmatic problems. The doctors at Alanya prescribe this treatment regularly, and every morning before tourists enter the cave there are some hours reserved for patients.

In between doctors from all over the world suggest to patients suffering from asthma or other bronchial diseases to spend 21 days minimum with daily 4 hours inside of the cave. Because of that the local authorities have closed the cave in the morning between 6.00 and 10.00 o´clock for public visitors. For taking part in the cure as a patient you will need a signed medical certificate from your doctor.

Kızlar Mağarası (Girls' Cave) is the place where pirates imprisoned their female captives. It is also called Korsanlar Mağarası (Pirates Cave) because the pirates kept their stolen goods in here before delivering and selling to the people of Alanya.

By the help of rowing boats you will be able to enter the cave. The inside is a huge hall and it is said that there had been a secret stairway up to the castle of Alanya in ancient times which is broken. But until now nobody could find this way.

Fosforlu Mağara (Phosphorus Cave) is named after the phosphorescent colour of the light inside. However, this is a so called Blue Grotto, where the sunlight shines through water into the cave and is thus filtered so there is a brilliant shimmer and glitter to be seen in the water and the walls of the caves.

At the end of the peninsula you will find Lovers Cave. The entry is big enough to get in even for huge people. The length of the cave is about 70 metres and is leading to the West of the peninsula. During the summer the tourists boats take a break at the entry and the guide is asking for brave passengers to join him getting into the cave.

At the other side, because in between the boat is over there as well, you will need to jump into the water because of no other possibility. You need to be really brave, because the height is about 10 meters.

Syedra - ancient City on the way to Gazipasa