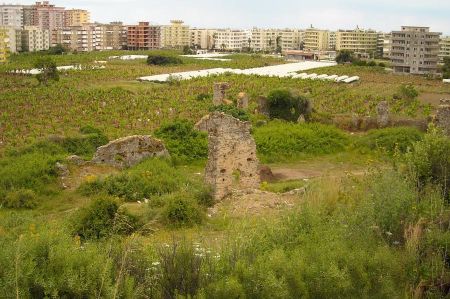 More interesting is the antique town Naula in the middle of Mahmutlar. On the coast road from Alanya turn north (sign) by a cemetery in the eastern part of Mahmutlar.

Turn left (west) on a parallel road and past a tortoise sculpture. The ruins are north of the road on a small hill, around 500 metres from the coast road. A path - possibly with grazing cows - leads from the bus shelter to the ruins. There is a track around the town, open from the north, and many of the ruins are to be found in the banana plantations. The present day name is Naula, but its former name is unknown. It used to serve as a port for Laertes.The ruins date back to Roman and Byzantine times*, mostly Byzantine.

Near the path is a basilica with three ships and apse, and the left track leads to the thermae with the big vaults. There are also normal houses where arches, niches and traces of wooden beams can be seen.