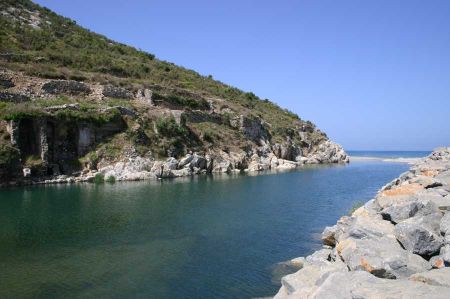 Antique town, placed on two hills 15 km east of  Gazipaşa and 2 km north of the village Adanda. In Turkish it is called Adanda Kalesi. On the main road a Lamos sign points north at the centre. After that there are no signs, so this road cannot be recommended.

Instead follow the road through the village Hasdere, which you can reach by turning left (north) across a bridge from the main road 1 km east of the Gazipaşa city boundary. In Hasdere, which travel companies use for excursions to villages, one can see several Turkish houses and a square tomb with a cupola over it.

7 km after Hasdere in a road fork you keep right towards Adanda (3 km) and Adanda Kulesi (5 km). 2 km after Adanda in a left bend there is a  stone road to Lamos only accessible by jeep, but you can park in the bend on the right side and walk up, which will take you an hour. The trip to Lamos is no picnic but does require some stamina. It is ideal for the hiker in good shape and with the right footwear and a water bottle.  The reward is a fantastic view and unspoiled nature. The stony road divides into two, and either road is in order. If you take the right one you will get to terraces and a spring. After the spring follow the goat path through the thicket and up the mountain to  the eastern hill. The left path is longer. After a house it becomes a narrow path to the right (south). Use the goat path up the eastern hill. It may be possible to hire a guide from Adanda.

The town was probably the main city in an area called Lamotis. The name derives from Hittite Lamija, meaning an early sett-lement. It existed in Hellenistic time, but had its great period during the Roman Emperor Gallineus (253-268). It used to have a temple for the three emperors Vespasian, Titus and Domitian, built in the 1st century AD, but otherwise the main god was Zeus and the local river god. It was probably here that the Byzantines made peace with the Arabs in 965. The town was taken over by the Armenians in the 12th century, and the town was known to be a bishop’s residence until 13th century. 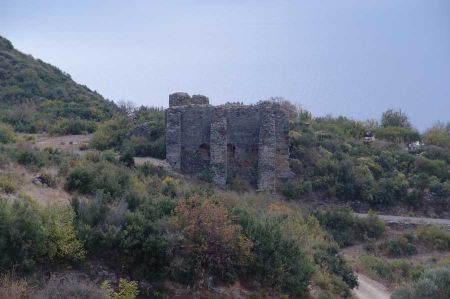 On the smallest hill to the west was the acropolis, and a fortress and the remains of 2 north-south walls on the eastern side. The outer wall reaches a height of 10-20 metres and has two square towers and a rectangular tower in the south end, where the wall turns west. The Greek inscription over the gate in the outer wall tells us that it was constructed in the 3rd century. Note also the eagle with the snake in its beak. North, south and west the slopes are steeper, the walls were smaller and therefore not so well preserved. A bath against the outer wall has two vaulted rooms. Inside the walls there are remnants of towers and other buildings, some probably old temple ruins. On the east hill there is a supporting wall, south of which there are graves and two bath ruins. The agora* is on the east slope, but there is little to see. On top of the hill there used to be a road connecting the agora with the necropolis.

If you continue along the road from Adanda to Doğanca you get to some graves in the cliff called the king graves.