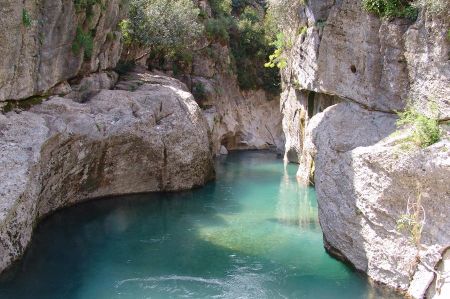 Emerging from the Taurus Mountains and running through a number of amazing canyons, Köprüçay flows into the Mediterranean to the South of Serik, Antalya.

Fed by underground springs in gorges that cut through steep, nearly impassable canyons, the Köprüçay constitutes one of Turkey’s most beautiful natural recreation areas.

On the other hand, the numerous archaeological sites in the area such as the ancient city of Selge (Zerk) located in the mountainous terrain on the west side of the river, the fortresses on the banks of the river, arched bridges of the Roman Period and historic roads improve the significance of the Köprülü Canyon.

Köprüçay is reached from Antalya via Serik, then Taşağil and Beşkonak. Those coming from Manavgat direction can reach Beskonak via Taşağil. The road that reaches to Beskonak is made of asphalt and occasionally follows the Köprüçay.

Köprü Canyon is being used for rafting

Especially to get amateurs used to rowing technique, starting from approximately 100 m before the Oluk Bridge where the water is still and the river forms a pool, the bridge is reached by paddling against the current. Amateurs usually enter the canyons from the Oluk Bridge, while the professionals may do so either from the falls near the start or from the Oluk Bridge, turning around further ahead to start the trip. After passing the waterfall that is right below of the starting point, the course continues with a difficulty class of 2-3. The waterfalls that are encountered often throughout the track, contributes to the excitement of the track, apart from the beautiful landscape they form.

After the exciting trip that lasts for about 10 km, the concrete bridge that is ahead of Beskonak is reached. Amateurs are advised to end their journey right before this bridge. Professionals may continue into the first canyon after this concrete bridge. However, entering into the second canyon is to be strictly evaded. In some sections of this canyon the river runs under the rocks and reappears some distance further.  By the end of the first canyon which lasts for about 3 km, the asphalt road can be reached by walking on the left bank.

Roman Bridges along the river

Following the riverbed, you will reach some ancient bridges. One of them has been restaurated after a lorry tried to pass. To prevent this in the future, constructors made the way little smaller. Excellent view for fotos and clear blue water makes a lovely stopp-over necessary. If there is time enough some small restaurants will serve smoked trout, which is delicious. Steadily climbing road will at least lead you to ancient city of Selge, which is nice to visit as well. Since time is running, we decided to turn back to mainroad.

Water supply of ancient metropolis Side