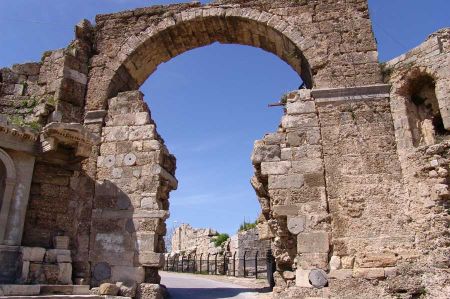 The road that turns towards South at kilometre 72nd of the main road from Antalya to Alanya direction, will take you to Side after about 6 km. Side is one of the most famous holiday resorts nowadays. It is supposed that Side had been founded by the Kymellians in the 7th Century B.C., settled on a small peninsula that extends into the Mediterranean.

With ancient city ruins that witnessed a history of thousands of years on one side and with many different facilities of various beauties that enfolder tourism on the other side, the position of Side is unique, compared to the common holiday resorts.
Besides the beaches that preserve their charm at any given moment with their fine sand and the crystal clear waters of the Mediterranean through which it shows its entire adorableness, with various cultural and sporting activities, Side is a heavenly resort, where you will wish that you could stop the time.

Such an engagement of history and nature, offers lively moments to the visitors of this charming town, all day long and during the night.

Side Museum - The history inside and Open Air 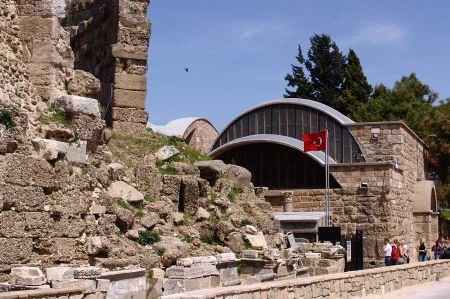 The Side Museum is located in city center of Side, about 8 km from Manavgat. The former Roman Bath ´next to the ancient agora that is left from 2nd – 3rd Century A.C. belonging to the Roman period, it has been restored as a museum during the years 1960/61.

Most of the historical artefacts that are exhibited in the museum are those that had been found during the archaeological excavations performed by Professor Dr. Arif Müfid Mansel between 1947 and 1967 in the ancient town of Side.  There are inscriptions, weapon embossing from Hellenistic, Roman and Byzantine Periods, sculptures which are Roman Period copies of Greek originals, torsos, temples, tomb steles, portraits, osmotic and column pedestals on exhibition in the museum.

Exhibits in the Hamam (Museum) Building 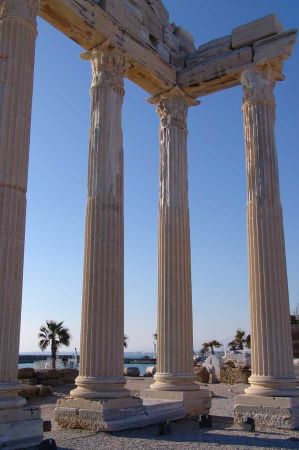