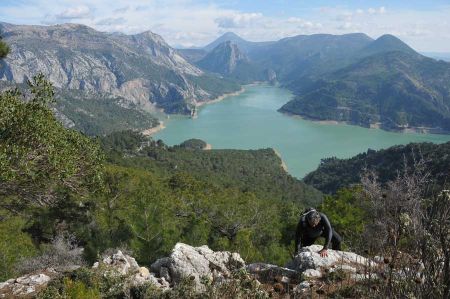 Once again it was time for a hike. Our dear friend and hiking guide Ömer had invited us to another excursion through the coastal Taurus Mountains near Manavgat high above the Oymarpinar dam.

In the early morning we first went by car from Manavgat in the direction of Oymapinar dam, then turn left onto a winding road into the Taurus to the village Avasun, which seemed almost extinct.
In the middle of the village square we parked the vehicle, which, as we should see after returning, was not that deserted at all. It was written in a pupil-like script: Wash me! The student authors were right in any case, but the track had really been too dusty.

Ömer first led us through relatively flat terrain, which was used by the farmers up here in the context of small fields, which were surrounded by stone walls and used for planting with grain and legumes. The sometimes ancient separation between footpaths and fields through the stacked stone walls was still clearly visible. On the other hand, the construction of a modern concrete fencing, which had simply fallen down on almost 70 meters due to poor foundations, was rather pernicious. 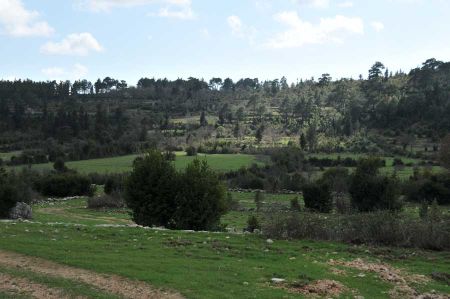 At the edge of the village, Ömer made us aware of the most important product of this village, which was stored in large bundles of shrubbery in some areas: real laurel, sometimes also called noble laurel or spicy laurel. We know the real laurel in the use as a spice plant, because the aromatic leaves of the laurel tree are ideal for using as a seasoning in soups, in stews, even in meat dishes or fish. Often the roach trout is inserted a bay leaf. At Ömer's question, we also remembered the use of pickled cucumbers or herring, and bay leafs are often added to the production of brawn.

Even today, mountain farmers use the fruits of the laurel tree called Fructus Lauri as antiparasitic agents to get rid of lice or itch mites. In Europe, these applications were at least known until renounced due to often occurring side effect, allergic contact dermatitis on the use. In the treatment of dairy cattle in udder diseases, Fructus Lauri is still used today. For this purpose, the laurel fruits are squeezed, resulting in a buttery, greenish mass, which consists up to about 95% of fatty oils and about 5% of essential oils, the oleum Lauri. Almost like a cream, laurel oil is used medically for rubbing in bruises, sprains and rheumatic complaints. All over the world you will find plant species with aromatic leaves, which are often referred to as laurel. Most of these leaves, however, have hardly any flavor resembling real laurel, nor are they used so effectively as medicinal or spice plants.

Bushes and shrubs - companion of laurel 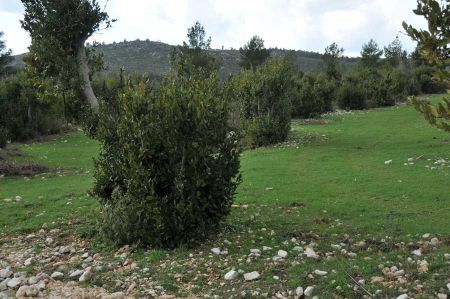 During all the descriptions and explanations, we have long left the village environment. Then meet on the first laurel bushes at the edge of the road, whose "processing" by human hands is clearly visible. Normally, the real laurel is an evergreen shrub or tree that can grow up to 10 meters high. Our first sample is just 3 meters high. Immediately Ömer is back on the spot and explains the facts. The mountain farmers cut the young shoots and branches together with leaves from the trunk, which are then carried to shrubs bundled into the village. Here, in a joint action of the villagers, the leaves are "picked" by the branches and shoots. Tons are then bay leaves on the surfaces in the village, so distribute the leathery, glossy on the top leaves an aromatic fragrance throughout the village.

Let your foods be your remedies and your remedies be your foods.
The most famous physician in antiquity, the Greek doctor Hippocrates of Kos, recommended this rule as early as the 5th century BC. 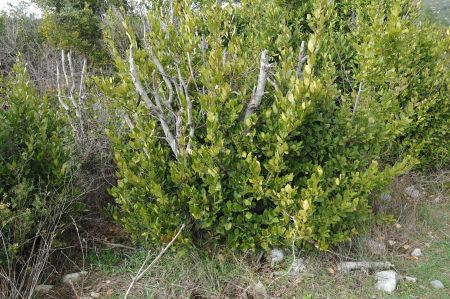 Many of us know, at least since the stories about Asterix, about the Roman laurel wreath. The ancient Greek name for laurel was "daphne" (in Turkish "defne"), so that one meets the following context in mythology: to avoid the pursuits of Apollo, the nymph Daphne turned into a laurel bush. From now on Apollo wore a laurel wreath entwined with twigs, as a sign of his grief for his unrequited love for Daphne. As always, when it comes to themes from mythology, little is known about the sources or the origin of the stories. Whether it is perhaps even the effect of the leaves of the real laurel, which were enjoyed in large quantities, leading to trance and disturbance of consciousness, at least is possible. The historians do not suspect that the visions of the priestesses of the oracle of Delphi are due to the enjoyment of laurel.

The Romans who settled here also used the laurel 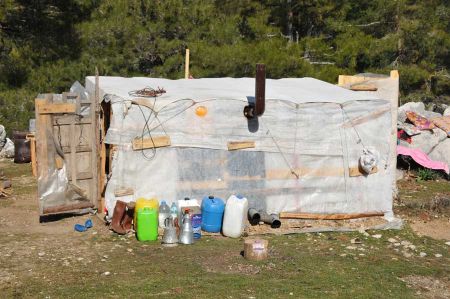 When the Romans moved into the area, the general or leader was crowned with laurel. The Corona Triumphalis was also the official jewelry when performing in public. Later, the winners in the games or competitions received a wreath of laurel leaves as a special award. Even today, the laurel wreath is a symbol of glory or victory, but also a symbol of peace.

Meanwhile, we had long reached the transition to the pine forests and Ömer led us along the goat paths ever higher up into the mountains. Further up we came upon a lumberjack camp, a camp of the simplest type of family lodging where Turkish lumberjacks lived with their wives. Usually, women went about their daily activities, such as washing clothes and cooking, while men felled previously marked trees. Quite relaxed, we were able to examine the "one-room houses" erected in a quick-build way, which we were unhesitatingly introduced to as clean and tidy. In general, the people met us extremely friendly and relaxed. On a pickup tons of flatbread were stored, which had been prepared for sale in the next village with market and for self-consumption. We were absolutely surprised when, almost hidden from all the bread, we came upon a very modern commodity of our "civilized" world: photovoltaic cells. So far away from any modern life style, but electricity in the cottage. It is sometimes fascinating how much you can be surprised by all your prejudices. 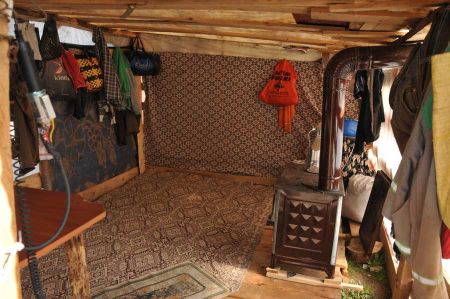 Ömer pushed again to continue, because only about 500 meters away, there was another highlight of our tour today, the view from far above the Oymarpinar reservoir. Indescribable. It took us quite a while to process this phenomenal view on our own: the blue shimmering reservoir with the deep green forests around it, in the background the snow-covered 3,000 m peaks of the Taurus Mountains. It was really beautiful, so we stayed for a while. In general, we just realized how indescribably pleasant the climate was to stay in nature. It was about 18 - 20 ° in the sun. And even in the shade of the trees, it was still too warm in the outdoor jacket.

Beautiful surroundings and stunning views of the Oymapinar Reservoir 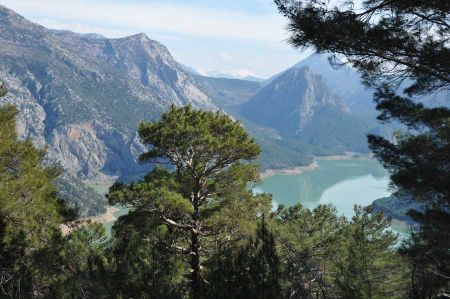 Now it went on up the mountain, because Ömer had already mentioned on the way to the mountain peak, which is described by the local population with house of the eagle. There were hardly find any goat paths that could be used for the ascent. Shrubbery partially blocked our way, but again and again Ömer found a passage for further ascent. Already the first massive worked stones were visible, which clearly indicated a building from earliest times even in remnants of the wall. We also found some remnants of potsherds that could be classified by hand as carafe handles or bulbous vessels, including parts of roof tiles. Also made of clay. But the thought of the laborious transport here suggests a Roman settlement or fortification. Also, the fluting of some stones seems to confirm our guess. Or maybe this place was populated by humans much earlier. Inquiries of this matter have never been given to our knowledge base.

On the side facing away from the reservoir we started the descent. The man-made terraces were clearly recognizable, sometimes only a few square meters in size. Every now and then really precisely worked stone blocks, which were set up to walls to increase cultivated areas. So many people have never made such effort. That became clearer to us.
Further down we came again on goat paths, which we now gratefully accepted for use. On the way we came across a large, free-grazing herd of goats, who were interested in the many herbs among the pines. Sometimes without supervision you could sometimes just hear the little bell of the goats in the dense shrubbery. Just further down in the direction of the village we came across the homestead of the goat farmer and were greeted by his dogs with a loud barking. Why the dogs were not with the herd, we could not learn in the subsequent conversation with the goat farmer however.
After a few more kilometers we had reached our starting village again. So we went back to civilization, where we prepared some trout due to our onset of hunger, were served with salad and boiled Bulgur. A delicious meal after a wonderful hike through the Taurus, with some laurel leaves in the fish, of course. Delicious.
If you are interested in one of the described hikes, here is the contact: This email address is being protected from spambots. You need JavaScript enabled to view it.