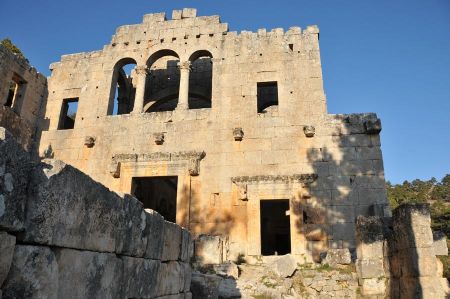 We headed from Mut towards Karaman on Highway 715, which is currently being improved. After the first bend about 22 kilometres after leaving Mut, we are struck by the silhouette of the Alahan Monastery higher up on the mountain.

Subsequently, we arrive at the junction leading towards the mountain. Although there are road signs at the junction, they are partially hidden from the eye due the constant work of construction equipment. The road takes one directly to 1200 meter altitude over the hillside rising from the bank of Göksu River to the southern side of the mountain mass. We pass through a gate, which obviously is not manned due the season. We park our car at a small parking lot directly below the monastery complex, seemingly erected over a terrace set on the side of the mountain. We are awe struck by the magnificent view opening to the giant canyon on the side of Göksu River bed. The weather is cold and windy with dense clouds forming over the magnificent valley. Ruins of the monastery looks lonely with the superb scenery on the background.

Whole of the monastery complex once consisted of four main sections; Evangelist basilica, baptistery, Eastern Church and porticus. We reach the monastery section via the porticus. The road to be covered is about 130 meters in length and 5 meters in width and offers the panorama of Göksu Valley. Indeed, it must have been impressive scenery for monks as they went to the church. Impressive due to its size and evocative due to the architectural style from the monastery we head towards the Eastern basilica. This is the best protected section of the monastery complex so far. The stone structure and the embellishing carvings on the stone withstood the forces of nature for about 1600 years and are admiringly beautiful still. Examining the connection style of stone blocks we discover that the artisanship was extremely advanced in comparison. A bust of Jesus Christ surrounded by two angels carved on the main entrance is still visible. Also, a location plan of the basilica has been carved on the stone is visible.

The old baptistery is divided into two sections by a line of columns, some parts of which are still erect. A baptizing pool carved into stone in the shape of a cross sits at the northern part. The water way connected to the naturally rocky section behind is still there. The cells of monks and the tombs are carved into rock face in the direction of Eastern Church. According to an inscription, the founder of the monastery was known as "Old Tarasis". Apparently, he died in year 462 and was buried in one of the tombs over the rock face.

It is thought that the Monastery Complex was abandoned in the Middle Byzantine Period. However, the western basilica, from which not much has survived, was continually used up until the middle ages.

Mut - the City of Apricot