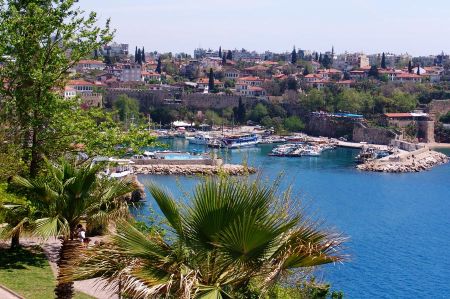 This walk can be completed within a morning or afternoon hike, or as long as you want it to enjoy it! Start at the Kaleiçi (Old Quarter) and walk down to the ancient marina or, if you wish, start at the marina itself.

The marina was once a fisherman's wharf but is now a busy port with many yachts, schooners and motor boats. Try some ajur, locally produced long, juicy cucumbers, or frenk yemesi, a refreshing cactus fruit that tastes like a cross between water melon and cantaloupe. It is said it can help to dissolve kidney stones.

Walk uphill from Iskele Caddesi, a narrow, winding street with many souvenir shops. One shop sells handmade carpets and you can see the young girls at work on the looms. You may see a man selling locally produced teas, spices and foodstuffs. Try some of the aromatic ada cay (island tea, sage tea), dag cay (mountain tea) or papatya cay (dandelion tea). Or why not buy a tirmis, an edible that looks like corn but tastes like hazelnuts. Soon you will arrive in one of Antalya's main squares, the Kaleici Square, with its Clock Tower, which was once part of the city walls. To your left is the Yivli Minare (Fluted Minaret), a red-brick tower that is, today, the symbol of Antalya. The 37 metre high tower was built in 1230 by Alaeddin Keykubat, a Seljuk Sultan. The original mosque, of which it was originally a part, was destroyed and replaced in 1373 by the Alaeddin Mosque.

Just to the south of the Fluted Minaret, towards the marina, is the Karatay Medresesi, an Islamic religious school constructed in 1250. Close to it, but on higher ground, are two tombs: Zincirkiran Mehmed Pasa Turbe, built in 1378, and the Nigar Hatun Turbe, constructed in 1502. The nearby Islamic theological seminaries, Atabey Armagan Medresesi and the Ulu Cami Medresesi, are now ruins. Now walk back to the Clock Tower and immediately behind you will reacs the 17th.'century Tekeli Mehmet Pasa Mosque. This mosque is unique because the Son Cemaat Yeri (the last assembly place) is covered by domes inside rather than outside. Foreigners are allowed to enter the mosques, but must remove their shoes before doing so. Women must also cover their hair and arms.

Cumhuriyet Bulvarı, which eventually becomes Orgeneral Kenan Evren Bulvari, runs east-west through the city. Turn left at the Clock Tower and walk along this street, which is the main shopping area, lined with designer clothing stores and fancy seafood restaurants. To your left is the Mediterranean Sea, with the Beydaglari on the horizon. As you continue, you arrive at Cumhuriyet Meydani (Republic Square), with the huge equestrian statue of Kemal Ataturk, the founder and first President of the Turkish Republic. About 4km down this street (on Orgeneral Kenan Evren Bulvari), near the Konyaalti Beach, is the Antalya Museum.

Return again to the Clock Tower and continue to Ataturk Caddesi, an avenue that cuts across Cumhuriyet Bulvari on a north-south axis. There are a number of lokanta (small restaurants) in the alleys near the crossing. Turn right at Ataturk Caddesi and you quickly come upon Hadrianus Kapisi (Hadrians Gate), a magnificent three-arched marble gate erected in AD 130 in honour of the Roman Emperor's visit to the city.

Continue along the street to the Belediye Sarayi (Town Hall) and enter Karaalioglu Park, which is lined with palm trees and offers pleasant coffee houses and stunning views. Walk to the eastern end of the park and you come to the Mermerli Coffee House and the Hidirlik Kulesi, a round tower that is believed to be the tomb of a Roman senator from Antalya. Walk up the street that intersects the tower to the Kesik Minare (Broken Minaret). This unusual structure stands next to the Korkut or Cumanin Mosque, now a ruin. It was originally built in the 5th. century as the Panaghia Church, then converted into a mosque and finally destroyed in the 19th. century. From the Kesik Minare, retrace your steps for refreshments.

Antalya - Trolley from Nuremberg as Attraction