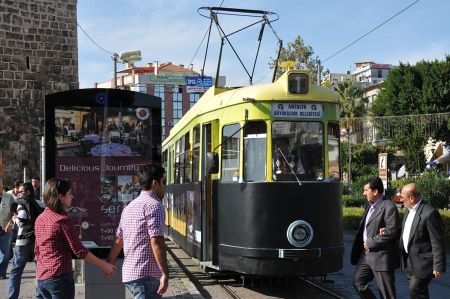 Besides the historical structures with Hadrian city gate and the city walls, there are three traditional old trolley´s at work in Antalya. These trains belonged to the former Nuremberg trolley. A line of about 5 kilometers parallel to the coastline was allocated for the traditional Antalya trolleys in 1999.

There are 10 stationsbeing used beginning with the last station known as Zerdalilik and ending at the Antalya Museum. The involved Museum is famous for its archeological artifacts from Perge.

Moreover, attractive places that draw the attention of tourists are just near the trolley line, so you may stop and do some seightseeing. Namely, this can be explained as the reason why the Nürnberg trolleys was installed around the ancient city center of Kaleici.

The historic tram from Nuremberg

The original design of nearly all wagons have been conserved with their classical wooden banks. Inhabitants of Antalya welcomed these wagons, as they are recognized as a gift from Nuremberg which is known as a partner city. Today three trolleys – bearing numbers from 1 to 6 - and a trailer wagon operates 2 times per hour. There are some travel schedules displayed on certain places. These plans should be seen as a rough idea by tourists in order to have a general view on the travel route, because the trolleys actually are not involved in the "planed" city traffic. The trolley run slowly due to the busy traffic and the strings on the rails. In the end, it is possible to offer a rich seightseeing tour to the tourists while passing some of the attractions.

A New Trolley in Antalya

By the way, the modern trolley system, to contribute and coordinate the busy vehicle traffic in Antalya, is put into service. The total length of this trolley line so far is of 11 kilometers and the destination route consists of 16 stations. The trolley serves like a bridge between the North-western regions in the city. The trolley shall compose a part of 43 kilometers within the framework of the traffic development plan prepared by the Antalya Metropolitan Municipality for the upcoming years and for Antalya’s traffic flow.

A sum referring to € 40.5 millions was first allocated by the European Investment Bank in order to meet the construction expenses. The involved bank contributed actively to the city development plan for Antalya during the previous years. For instance; the investments for drinking water and for the sewage system was financed by this bank. Furthermore, the buildings in Antalya are linked to the involved sewage system.

Extensions in the course of the World's Fair

The project for the construction of new tram line is underway. The new line will start from Varsak and follow Main Bus Station (Otogar) - University Hospital - Research Hospital - Antalya Museum. The line will be connected to the current nostalgic tram line, which will be renewed as double track. The whole line will be 23 km long with this renewed part.