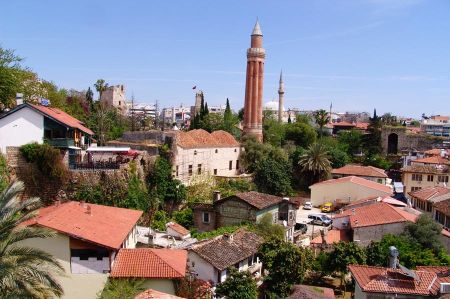 The Alaaddin or Yivli Minare Mosque ("Fluted Minaret" Mosque), commonly also called Ulu Mosque (Turkish: Ulu Cami, "Grand Mosque") in Antalya is a historical mosque built by the Anatolian Seljuk Sultan Alaaddin Keykubad I at the beginning of his reign.

The mosque near the Fluted Minaret is a historical mosque which was once an important church of ancient Antalya. The mosque's fluted minaret, which is decorated with dark blue tiles, is a landmark and symbol of the city today. The mosque is located in Kaleiçi (the old town centre) along Cumhuriyet Caddesi, next to Kalekapısı Meydanı.

It is part of a külliye (complex of structures) which includes the Gıyaseddin Keyhüsrev Medrese, Seljuk and Dervish lodge, and the vaults of Zincirkıran and Nigar Hatun.

The mosque was first built around 1225 to 1227 and fully reconstructed for the second time in 1373. The minaret is 38 metres (125 ft) high, built on a square stone base, with eight fluted sections and has 90 steps to the top.

The Seljuk Sultan Alaadin Kaykubad I reigned between 1220 to 1237. The original mosque was destroyed in the 14th century and a new mosque was built, which, with its six domes, is one of the oldest examples of multi-dome construction in Anatolia.

Today the building houses the Antalya Ethnographic Museum and contains clothing, kitchen utensils, embroidery, tapestries and looms, socks, sacks, kilims, ornaments, and nomadic tents. It was opened to the public in 1974.