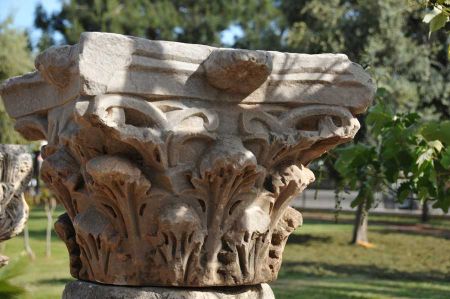 The museum in Alanya, which opened in 1967, consists of two main sections, in which archaeological and ethnological treasures are exhibited.

Valuable finds from the ancient Bronze Age, the Urartian, Phrygian, Lydian, Greek, Roman and Byzantine periods are shown in chronological order in broad display cases. These finds were brought here from various archaeological sites in Anatolia. In this way one could present an Anatolian art chronology in the museum and thus emphasize the importance and the historical richness of this country. Among the precious, objects are particularly worth seeing:

In the second section of the museum we find ethnological treasures, such as regional handicrafts, hand embroidery, historical men's and women's clothing and weapons, mostly from Alanya and its surroundings. Here you get an impression of the aesthetic works that Turkish people have accomplished and of the undoubtedly existing artistic talents of this tribe. A fascinating showroom is an old and original Alanyan room from the 19th century.

The room was dismantled and reassembled there after being transported to the museum. The floor covering and the windows are evidence of high carpentry. The wooden ceiling and the closet doors are examples of regional carving. Other items on display in the display cases are weapons, rifles, arrows and bows as well as swords from the sympathetic period, a handwritten Koran and some handcrafted carpentry. Numerous ostotheques (urns containing the ashes of the deceased) are distributed in the showrooms and garden of the museum. These aesthetically pleasing objects, mostly made of local limestone, are examples of the burial tradition of this area. The people living here - aware of the difficulties in digging out the rocky earth - chiselled the abundant limestone, burned their dead, filled their ashes in the urns, and thus gave their loved ones immortality. In the Roman and Byzantine eras, these ostotheques were made in the style of sarcophagi. Most of them are decorated with wreaths of acanthus leaves and lotus ornaments. A few women or men heads are chiseled between the wreaths. These heads have the typical characteristics of Cilician sculpture.

The statue of Heracles 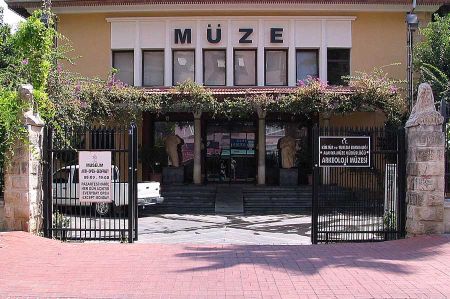 The bronze statue of Heracles is one of the most beautiful pieces of the Alanya Archaeological Museum. It stands on a stone pedestal, which is probably not the original pedestal. The statue was found in 1967 in a mountain area 35 km northwest of Alanya, it has a size of 51.5 cm. The pirates, who at that time were in control of the Cilicia, probably stole the statue from a ship or captured it in the area. The meticulous way in which Heracles' hair and beard are made expresses the sculptor's high ability. The curly beard covers cheeks and chin like tongues of flame. The strong muscles of the hero's body are modelled with great mastery. He holds his famous club in his right hand and in his left hand he wears the fur of the Nemea lion that has just been killed. The statue is assigned from the 2nd century BC. Today it can be admired in the museum in its own showroom, on whose walls Heracles' heroic deeds are depicted in pictures.

Heracles is persecuted by Hera with hatred and anger from the day of his birth until his death. Her enmity ultimately drives Heracles mad and causes him to kill his children one by one. As a punishment for his crimes, he was sentenced to serve Eurystheus for twelve years. If he would do his job successfully, he should be rewarded with immortality. He had to do twelve things to achieve this goal. By virtue of his courage and strength, Heracles passed all the tests he was given. As the first act, he had to kill the Nemea lion and always carry his fur with him. The fur became his distinguishing mark, and when he passed all the tests he was given, he died in a conflagration himself. This catastrophe ultimately brought about his immortality.

The tombstone was discovered in the ancient city of Hamaxia (Sinekkalesi), 12 km away from Alanya. It is made of sandstone and measures 80 x 55 x 55 cm. At the foot of the stone there is a one-line Greek inscription. According to the inscription, the stone was made for the Trebenis family. Father Trebenis and mother Nana are placed in front, the figures behind them are Kilamaros, Tebenis' son, in a soldier's outfit, with a lance in hand, and the figure at his side is his sister, as a symbol of virtue. The front facade of the stele is designed as a naiskos (sacral chamber) and on the architrave of the stele is depicted an ox fighting with a lion. On the right side of the stone you can see Kilamaros, his mother and a small child. On the left side are two figures reaching out to join hands. The stele is from the first half of the 1st century BC. attributed to.

The Ottoman Bedesten of Thessaloniki
Skopje - Ottoman rule in Üsküb