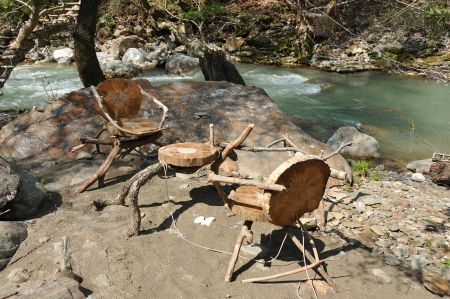 When our co-author Wolfgang Dorn travels to Turkey, it usually comes to a short get-together for a short trip to one of the many possible destinations along the Turkish Riviera.

This was the case last weekend when Wolfgang called from his hotel in Okurcalar and spoke of a "trip" via Güzelbag and Gündogmus to Pembelik on the high pasture at the foot of the 3002 meter high Geyik Dagi, as there is said to still be some remains of the Lebanon cedar there. Our counter-question whether snow chains will be still necessary was fortunately answered in negative.

So we met on Sunday in Okurcalar and drove towards Alanya to the junction of Peyallar and Güzelbag. The road rises quickly and soon we have to master the first serpentines. Work is being done feverishly on expanding the road above Peyallar, and trucks and excavators are even active on Sundays. We make a first stop at a sign pointing to a waterfall on Kargi Cayi, where an allegedly "open" teahouse is said to be located. The descent into the valley of the stream is well signposted, but quite strenuous.

Arriving at the creek we find some very peculiar but interestingly designed "leisure furniture" made from the flotsam of the creek. Otherwise the area is fallow, we are only greeted by a cat that needs to be cuddled. However, we are a bit surprised when we find a large quantity of fresh cucumbers on a table. After a few photos of the extraordinary equipment, we climb back up to the vehicle without a cup of tea.

The landscape is now becoming more and more beautiful and natural with extensive pine forest along the road that leads higher and higher into the mountains. After about 30 kilometers of often narrow routes and sharp, sometimes hidden curves but wonderful views, we reach Güzelbag, a sleepy mountain village, which we only cross in the direction of Gündogmus. After a first ridge, which takes us up to about 1,100 meters in altitude, the road first leads down into the valley of Alara Cayi, but then immediately climbs steeply again to over 1,200 meters at the foot of Sögüt Dagi. The bridge construction is interesting here, which still uses segment arches from the Seljuk period, on which a concrete construction was placed simply. The river Alara itself also glitters very colorfully in the spring sun, but is also ice cold.

After a few photos at the bridge, we continue about 10 kilometers to Gündogmus, where some old, almost collapsed houses catch our eye. Typical stone trusses, which are loosely stacked on planks, with layers of beams and planks covered with earth, which serve as the roof finish. Amazingly, we notice that some of these houses are actually still inhabited. Certainly a complex renovation, but what a difference to the otherwise monotonous, always boring concrete support constructions of "modern" Gündogmus. There are so many details that catch the eye, which suggest that the construction work was lovingly done in the past and that wooden partitions were used in the masonry, beautiful wooden doors and windows with folding shutters. What a difference to the cold, loveless concrete. And yet this substance continues to decompose.

We cross Gündogmus towards Pembelik. Plenty of snowfields to the right and left of the road still indicate the winter that has just been overcome. At about 1,400 meters in altitude and about 8 kilometers after Gündogmus, we turn left to the village of Pembelik. Here, too, there is hardly anyone to be seen in the village, just a woman with a child on her back, so that we drive a little further up the Geyi Dagi mountain.

Unfortunately, the solid road surface already stopped in the village and about 500 meters after the village there is only a greasy track that had been used by a large herd of goats shortly before. Thousands of footprints along the way. We see one of the huge Lebanon cedars right by the wayside and decide to take some photos here.

Lebanon cedars right along the way

Even at great heights, the Lebanon cedar can reach heights of between 30 and 50 meters, and it is not uncommon for it to be 1,000 years old. More than 5,000 years ago, the relatively easy to work, but very resistant and durable wood of the Lebanon cedar was used to build palaces and temples, which drastically reduced stocks. With the increased use in shipbuilding, the stocks fell so drastically that it is difficult to find this extraordinary tree today.

For the Phoenicians, the Lebanon cedar was considered the queen of the plant kingdom, which was even used in folk medicine. Even today, farmers use pine oil to treat wounds and as a remedy for skin diseases. The Egyptians also mainly used imported Lebanon cedars for shipbuilding.

In the meantime, fortunately, the realization has prevailed that this tree species has absolute advantages over the fast-growing pine species and people are worried about the few remaining stands

In reforestation, too, the Lebanon cedar is increasingly being used; in Turkey alone, around 300 square kilometers are planted with the cedar species every year.

We have some fear of the further ascent to the mountain Geyi Dagi and since the evening is slowly approaching, we decide to end our little expedition and return to Okurcalar. A day trip that once again showed the diversity of the landscape, its culture and inhabitants.

The cedar of Lebanon grows along the Mediterranean coast of southern and southwestern Anatolia, in Lebanon, of which it is a symbol, on the high altitudes of Jebel Aansariye in Syria and on the island of Chrysi off Crete. There is also an isolated occurrence in Turkey near the Black Sea in Tokat Province. The total area of ​​cedar forests in Turkey is 600,000 hectares. The originally natural distribution area in Lebanon is around 500,000 hectares, which is now only 2,000 hectares due to overexploitation.

The distribution area in Syria is estimated at around 1,000 hectares. The Cedar of Lebanon is extremely drought tolerant but prefers locations with annual rainfall of between 590 and 1300 mm. Calcareous soils are preferred. They are found at altitudes from 600 to 2,100 m above sea level. NN. It forms, among other things, mixed forests with the Cilician fir (Abies cilicica), pines (Pinus spec.) and juniper species (Juniperus spec.) such as the stinking juniper.
The Lebanon cedar is one of the most widely used tree species. Beautiful, durable and easy to work with, Cedar of Lebanon has been used for nearly 5,000 years. In ancient times it was used to build palaces and temples. It was also a popular wood for shipbuilding and furniture making. The wood is still in great demand today for construction, carpentry and furniture. It is also suitable for pulp production. Before the Turkish Forest Protection Act of 1935 came into force, pine oil was extracted from cedar wood. It was used in folk medicine as a remedy for skin diseases and as a remedy for treating wounds. The essential oil extracted from the heartwood is sold as cedar oil.