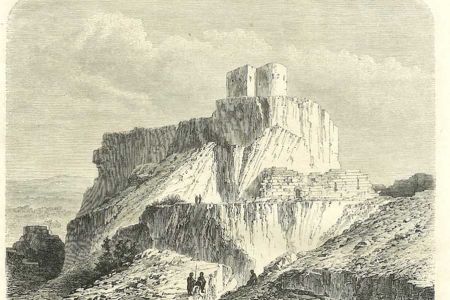 After visiting Yilan Kalesi fortress near Ceyhan and some very interesting days in Sanliurfa and Göbekli Tepe, we arrived in Tarsus on the way back towards Alanya.

With friends living there, an overnight stay was planned, which, in addition to a cosy dinner and interesting conversations, also led to the topic of crusader castles or, better, castles and fortresses in general. It was obvious that we wanted to visit Lampron Castle close to Çamlıyayla all together the next morning. Like Yilan Kalesi, Lambron is based as a rock castle too, although it was considered impregnable.

Since we were not running out of time, we first wanted to use the D750 in the direction of Aksaray to reach Lampron Castle and not to use the E90 motorway, which would also have been possible. It slowly climbed uphill to the junction of the Çamlıyayla Yolu through partially beautiful landscape and past small mountain villages on the Yaila. From Tarsus it is about 60 kilometres to the castle. If you need to ask for the right way along the way, please bear in mind that the castle is given different names by the local population, with “Lambron” being the simplest name variation. The name “Les Embruns” still exists from Franconian, as does the name “Namrun” from Arabic.

When exactly the fortress was built, it has not yet been possible to clarify clearly, because this would require excavations on a large scale. The oldest parts that can still be visited are definitely of Byzantine origin. Since parts of the vaults of the residential buildings are still preserved and these rooms are partly equipped with still recognizable hypocaust heating systems, the first development of the castle can possibly be traced back even further to the Romans. The location on the rock at least suggests this.

Between 1171 and 1172 the castle is said to have been besieged by the Rubenids Mleh due to internal family disputes. Lord of the castle at the time was Hethum, who was married to a niece of Mleh, but had chased her away. From historical records it is known today that the castle of Abul Gharib, who at that time was the Byzantine governor of Tarsus, was bestowed on the Hethumids Oschin in 1072. At this time, Oschin, like his opponent Ruben, held the title of "Sebastos" in eastern Cilicia. In 1183, Ruben III besieged Lambron fortress. Hethum then asked Bohemond of Antioch for help, which was granted to him. However, not in the form of troops to support the fight, but through the capture of Rubens during a feast in Antioch. A brother of Rubens by the name of Lewon continued the siege of Lampron, but could not take the fortress.

After Levon became king, he pretended to wed his niece Philippa, who was a daughter of Rubens, to Oshin, the eldest son of Hethum. Due to the festivities then taking place in Tarsus, the castle was just poorly protected and Lewon was able to take it. Now he was powerful enough to force Hethum to enter the monastery of Drazark. Lewon knew from his own experience that Lampron Castle was impregnable, so he shied away from adding a new vassal to the castle. Certainly he feared, not without good reason, that every new fief-taker would sooner or later rebel against him. Because of that, he handed the fortress over to his mother, Rita von Barberon. Intrigues and entanglements that no modern film script could have described better.

According to another myth, Samuel von Ani is said to have claimed that he had conquered the fortress from the Saracens (probably the Seljuks). The story goes, however, that at this point in time the Seljuks had not yet penetrated into the Taurus. Later in the 14th century, the exact time and circumstances are not known, the castle fell to the Mameluks.

Trade routes and strategy as justification

Strategically and also in terms of landscape, the location of the castle at the Cilician Gate was of paramount importance, as the trade routes from the coast to the Anatolian hinterland passed right here. In addition, there is the scenic situation in the centre of the three valleys that meet here on a narrow rock spur of the Bulgar Dagi, which is about 50 meters above the valley floor, which has significantly contributed to the impregnability. In the north, against the spur, the castle is protected by a ditch carved into the rock that is between 15 and 25 meters wide. The west-facing side consists of terraced terrain and thus offers the flank that is most suitable for attacks. Accordingly, the defences are of course the strongest here. Here on the western flank is also the only access to Lambron Castle. In addition to the actual castle, there is also an outer castle, which is supposed to intercept the first attacks. Resembling a lens in shape, the castle occupies a total area of ​​around 330 x 150 meters.

Due to the altitude and the associated coolness in the summer, Lambron Castle and the village of Çamlıyayla, which many also call Namrun, have become a tourist attraction and place of residence for locals from the coast. Entry to the castle is still free.

We have 448 guests and no members online