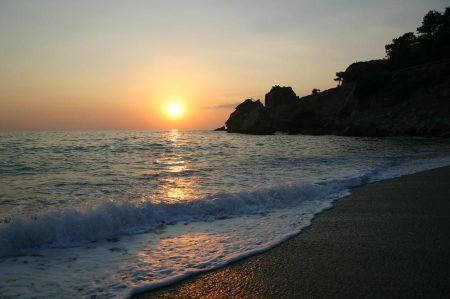 The beautiful and untouched nature of Gazipasa is not a feature restricted to land, the plateaus or the shore. The sea is also an important element in the region.

There is a colorful and lively activity going on in the sea. During the antiquity there were important ports around here.

These settlements got rich through maritime commerce and lived a happy life. They transported and sold timber from the Taurus Mountains. Olive oil and other agricultural commodities to the other regions of the Mediterranean and their vessels came hack with goods in demand here. The local people have always used the sea as a source of food and as a meaning of transportation. Sea routes were very important. The Mediterranean entered the annals of history primarily as a sea route.

But, in antiquity nearly all seafaring people operated as pirates. It has been predominated coastal piracy, when attacking with rowboats and galleys or coastal villages and coastal propelled or latching ships were attacked when favorable opportunities. Due to the development of the trireme in the 6th century BC,  it was technically possible to track other vessels and operate in maritime piracy effectively. Overall, the development of piracy followed the technical possibilities of the respective age.

In a period of weakness of the Roman Republic in the last century BC, the threat of Egyptian grain deliveries by Cilician pirates became an almost existential threat for Rome. Just the decisive campaign of Gnaeus Pompey, 67 BC could restore the safety of the sea lanes in the Mediterranean. Never in the further history such a complete and permanent victory over the organized piracy has been achieved ever again in such a short time.

In the history of human kind, sea trade and shipping first developed in the Mediterranean. Because of its geographic suitability, the entire Anatolian coastline was dotted with the most important ports of the Mediterranean. These ports also provided a safe haven for ships sailing in the Mediterranean at times of stormy weather as well as serving for replenishing their supplies and doing trade. Because seafaring was so important for these ancient civilizations, they have naturally left their marks in the sea too. The Pegasus statue that the archaeologists found near the Gazipaşa coastline in 2004 is one of the last finds in the area. This small statue is one of the figureheads depicting gods and goddesses placed on the how of the ship in tile Antiquity to protect vessel from misfortune.

You can come across amphoras everywhere in this region. When you dive with goggles or watch from the surface with naked eye. You can see pieces of amphorae and ancient anchors lying on the bottom of the sea. There are also some granite columns lying in the sea off the Gazipasa shore that few people know about. They are still waiting for the archeologists to come and give a historical explanation for their origins. Let us quote here from an expert on Mediterranean history. Fernand Braudel writes in his hook "The Mediterranean” the following:

Gazipasa - the Banana story on Terracces at the Seaside

The ancient City of Selinus in Gazipasa