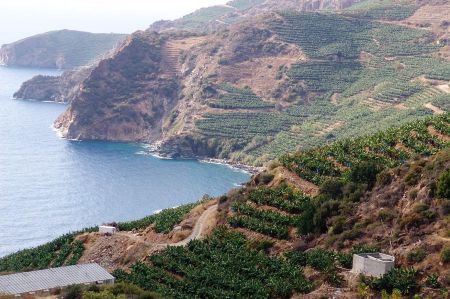 Almost all of Turkey's banana products orign from the coastline that begin next to Alanya and stretches throughout Gazipasa and Anamur along the coastline.

Until Turkey liberalized export and import trade, the only kind of banana known to the Turks was this extremely delicious, fragrant fruit growing on this coastline. With the explosion of imports, Turks got acquainted with the bananas produced on the plantation industries in Latin America and South Africa. Importation of bananas led to hot debates among the public. Imported bananas were bigger in seize and cheaper in price compared to the indigenous Mediterranean bananas. But they did not have that sweet aroma and delicate taste. When imported bananas flooded the market with their cheap price, local banana producers felt the pinch and banana production in Turkey fell sharply.

Banana plants were first brought to Turkey in 1750 by a rich family who had ties to Egypt. Originally, the banana tree arrived in this country as a garden plant. When it was seen that the plant also bore fruit that tasted quite delicious, people started planting banana trees after 1930 to sell its fruit. The development of banana production began in the 1950s and it continued to grow especially in the region of Gazipasa, Alanya and Anamur until 1984, the year when plantation bananas showed up on the Turkish market. From this year on, local banana production has been falling to lower levels compared to past years. The worst enemy of banana producers is frost. It is quite rare here in the Mediterranean region to see the temperatures drop below the freezing point. But, once it hits, the entire banana crop is destroyed. That is another reason why the producers are now somewhat reluctant to grow bananas. Those who do, have taken their plants into greenhouses to protect them against the frost. Plastic greenhouse materials are not prohibitively expensive anyway. The kind of bananas produced in Turkey is called Musa Cavendish or Dwarf Cavendish, probably due to the shortness of the plant The body of the banana plant is like an onion below the earth surface. Leaves sprouting out of the body multiply above the surface and the leaf stems one over the other form the “fake” body of the plant, which is not a real tree trunk. After 25-30 leaves grow above the surface, a stem carrying a cluster of flowers appear on the “fake” trunk and rise into the air from among the leaves. The cluster of flowers turn into bunch of bananas in time.

The banana fruit ripens earlier at the beginning of the summer and later by the end of August. The fruit is cut from the plants flowering in June in 76 days at the earliest and 110 days at the latest. The fruits around here is mostly cut from the plants flowering during the first week of July in 124 days at the earliest and 138 days the latest. But the bananas that flower during the first week of August do not ripen before December 27 and January 18 at the latest. That is, to say, in an average of 153 days. For the plants that flower second, third and fourth week of August, the ripening period for the fruit is 162, 164 and 173 days respectively.

Harvesting slowly starts in September and October and picks up speed in November and February. These are the months when an abundance of bananas are seen on the stalls. Bananas are usually collected when they are still green. They turn yellow in refrigerated storage. To delay ripening they are stored in ventilated chambers where the temperature is kept at 12.5 “C. Ripening can he delayed as long as three to four weeks. The temperature is raised up to 16 °C to start the ripening process. The fruit is sprayed with ethylene for a homogenous ripening. The old process of ripening by carbide is not used any longer.

Bananas Love Looking at The Sea

While you are walking around Gazipasa you will see that the slopes overlooking the sea are full of banana trees. This is not a mere coincidence. Banana plants love spots with a sea view. These slopes are open to the humid air coming from the sea. Banana plants like humidity as much as they do warm air. That is why, they grow well on the slopes that overlook the sea. The locals of Gazipasa explain this in six words. They say: “The banana must see the sea.”

Don't be startled if you hear noises from a banana grove you are walking by in the month of August. It is the banana plants “giving birth.” Locals also call this process “giving branches.” While the flowers break their outer crust to form banana clusters, a noise is heard. The flowers bend towards the ground while the fruit sticks up to form the banana bunch. This process is so quick that you can watch it happen. After the bananas are cut from the plant, the tree does not bear any other fruit for that season.