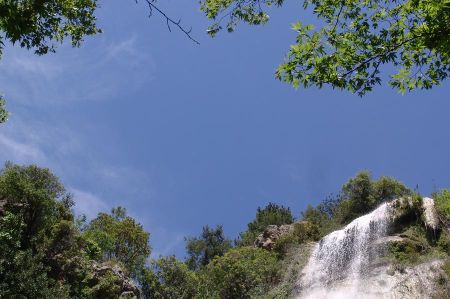 Whilst in search of places worth visiting in Alanya / Antalya region, we came across an old magazine at a second hand bookseller in İzmir. The book was, next to other topics, showing one article about “Uçan Waterfalls” near Antalya:

So we decided to look into the subject and soon realized that more literature on the waterfalls was scarce (indeed, there were in fact two waterfalls, not one; Uçan 1 and Uçan 2). This curiosity soon engulfed us for more research, so we decided to visit the area.

We took off towards Antalya on D400 highway and turned right at "Sillyon" brown road sign just before reaching Serik town. Without doubt, the antique city of Sillyon is worth visiting on a daily excursion. Of course, there, being no entry fees, makes it more attractive. However, we must admit the roads are not perfect and information on the settlement is non-existent. A female villager told us that the visitors to the site were scarce too.

We had to ask for directions a lot after Sillyon because there were no road signs directing the traveler to the village of Akçapınar, which is the closest to the waterfalls. As a matter of fact, one should not even try to find road signs to the waterfalls at all! From what we were told by the locals, one reaches directly to the waterfalls when approaching from Kozan side.  However, that way one reaches to the top of waterfalls and that is not what we want to do. As such, we passed the village of Akçapınar and drove into the forest. At one point, we had question marks in our minds as to whether we were on the right track and we decided to return after about two kilometers.
The path we had taken was a semi stabilized rural, undulating path that was rough. To our surprise, once we returned to the village we were told that we had in fact been on the right track. We had had to go a further 8 kilometers, we were told. So back on the road, we would try the second time. I just wished that my car was a four wheel drive!

After covering a magnificent pine forest with an immense variety of tree species and passing a bridge built over a creek, we stopped along the banks for a while. As we continued on the track, we could now hear the increasing volume of sounds from the waterfall. Suddenly, we reached the plains that seemed to appear from nowhere. There we discovered a few lakes with the clearest blue waters ever, which appeared to invite the onlooker for a swim. And there it was, a remarkably attractive waterfall of 62 meters high. We parked our car and decided to walk to the "Uçan 1 Waterfall". As we approached, we could see a small recreation facility and seating arrangements along the banks of the lake and at the bottom of the waterfall. The water splashing about by the force of waterfall was indeed a blessing after having traveled in this hot weather. Watching the water falling from the top and taking pictures was an immensely pleasing experience. Change of light and the decrease or increase in the amount of water falling provided yet another magical scene every moment. We could not see any other run of the mill visitors about. Though, we found out that a safari starting from Antalya covers the waterfalls as well.

It was now time to discover the Uçan 2 Waterfall. The stuff working at the recreation facility were polite in giving us directions. We should like to underline at this point to those would be visitors that it is a good idea to bring sandwiches with you and make sure you are wearing proper walking shoes. The track is quiet steep and can be walked. However, there are lots of stones on the track and your beach thongs won't suffice!
After a non-stop half an hour walk, we began to hear the thundering sound of falling water.  However, this time it was not easy to approach the bottom of water fall. The bush and forest got thicker and our approach was at times barricaded by small ponds along the creek. Once we overcame the handicaps along the creek, there, once more, we were greeted by the lake under the waterfall. I must admit, we have never seen such a superb, natural location in the past. Our first reaction was to find a spot to observe the riot of colors reflecting from the gigantic rocks. Uçan 2 waterfall is bigger and for us, more beautiful with its 78 meter fall height than Uçan 1 Waterfall. I should say it is almost impossible to describe the imposing nature of the location. You have to see yourself to understand what we mean. At least for us, words fail.

A long time after this trip, our conversations kept diverting to the twin waterfalls. Despite the slight difficulty in reaching the area, we feel that this is one place that everyone must see. So good luck and enjoy your trip to twin waterfalls!

First waterfall we arrived was Ucan 1