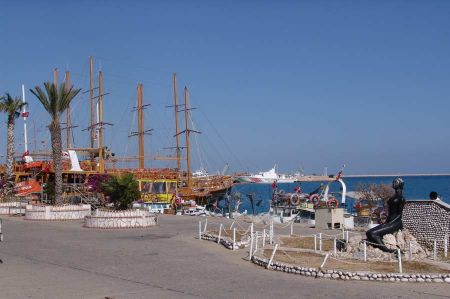 A really nondescript town on the Turkish Riviera, which has got its fame almost exclusively due to its car-ferry harbor: Taşucu - Ferry to Girne / Kyrenia on Northern Cyprus.

Today Taşucu is a small town on the D400, about ten kilometers west of the mouth of the Göksu in the province of Mersin. The main economic activity of the city Taşucu is the Turkish domestic tourism, especially in the summer months, which is reflected in small hotels and apartments along the main road. From foreign tourist flows so far been spared largely, Taşucu still encountered on remnants of the original Turkey, as well as on the second pillar of the local economy, fishing, which is still an important industry in the town.

But you can also have a look on Taşucu´s own history, because to the east of Taşucu are ruins founded by Greeks in the 7th century BC as a city called Holmoi. Arab pirate raids led to the destruction Holmoi's in the 4th century BC, whose inhabitants were resettled in that time to Seleucia on Calycadnus, today called Silifke.

To explore Northern Cyprus as part of our project, we wanted to take the ferry from Taşucu to Kyrenia (Girne) in the TRNC. Only from here or from Mersin there is a regular car-ferry service to the island. Only during the summer months a passenger ferry operates from Alanya to Northern Cyprus too. Two state companies are responsible for the organization and management of the crossing, which runs somewhat unusual but smoothly. This easily allows the booking of ferry tickets online, as well as the check-in smoothly. 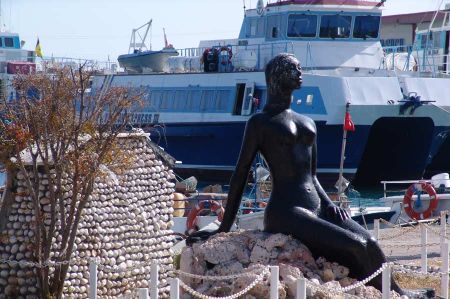 Something extraordinary is the customs formalities, because when entering Turkey the car will be added into the passport with date of arrival, now the vehicle must be taken out again. Since there is a maximum length of stay in Turkey for vehicles of 180 days, entry and exit are accurately recorded and registered. Your own personal stay in Turkey is limited to three month in between, which needs to be controlled too. In other words, only those who have a residence permit (Ikamet) for Turkey, can also make use of the aforementioned 180 days for the vehicle. All of this sounds complicated, but is relatively easy to handle. After payment of port dues the path leads directly to the loading point at the ferry.

Since we would face along the winding roads through Anamur, the arrival from Alanya was set very early, which now gave us the opportunity to take a snack at the port. Of course, we decided for fish which was deliciously prepared and fresh. Ever the harbor area was quite animated at these evening hours yet what is probably attributable to the relatively large number of students. In the resort, it is primarily the Department of Tourism at Selçuk University, attended by about 1,000 students which are enrolled.

Perhaps noteworthy is the partnership Taşucu's with the German city of Bergkamen, which has existed since 1994/95. In November 2007, a public square in Bergkamen was renamed to "Place of Taşucu".

Caravans and motorhomes - more diversity then ever