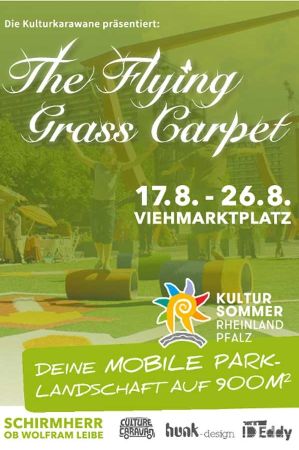 "Are you looking forward to the summer as much as we do," Jochen of Kulturkarawane Trier was asking when describing the entry into the most important event of the year 2018 in Trier, where people were called to discuss, read, listen to good music and celebrate life?

Well, that sounds like something for everyone! For us too!

We met, for the first time, at Camping Rino in Macedonia, where Jochen and Linda spent a few days of their vacation on Lake Ohrid for the purpose of stand-up paddling. Of course, the mutual introduction was as much a part of it, as well as not only thinking about the cultural similarities, but also to push one or the other project idea. In this way Jochen had also reported on the presence of the "Flying Grass Carpet" in Trier, which was thus also part of the supporting program of the Germany Tour for professional cyclists. The "Flying Grass Carpet" is the largest mobile park landscape in the world directly placed on the Viehmarktplatz in Trier. It transforms vile concrete blocks into a green oasis on nine hundred square meters, it proclaims the culture caravan:
"For ten days, on the Flying Grass Carpet, we will create a green island of artistic, creative and visionary thinking with numerous Trier actors with a colorful, entertaining art, cultural and sports program - even Karl Marx would have stared in astonishment at the beard of course, we would like to dedicate some of the program items to his birthday. 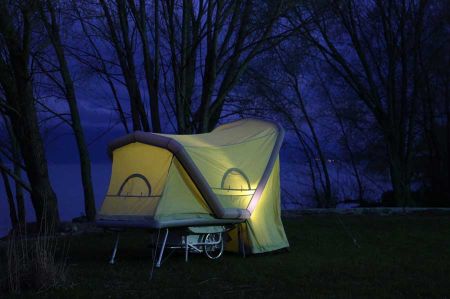 And now we team of alaturka.info join into the game, because ... our friend and supporter in the project work "A Journey of intimacy and culture along Roman Roads", Gernot from Vienna, is CEO of the company GentleTent, which just presented the so-called mini-caravan, technically correct presented the B Turtle, a bicycle trailer including inflatable tent above the luggage area at the relevant fairs very successfully and with great media presence. However, there was a great deal of interest from the renting sector in the concept of building a network of rental stations along Europe's most famous cycling routes. Since at the same time the Caravan Salon Düsseldorf begins, Gernot asked us to present the B Turtle on the Flying Grass carpet at his place. Nothing better than that, we have already been users and experienced the B Turtle and thus are an enthusiastic representative of this innovative travel tent trailer for the bicycle.

And so things are getting round, because the motto "Everything about the bike" is the motto on the Flying Grass Carpet on the 24th and 25th of August. Then the carpet is all about the Germany Tour in Trier. On these two days you can experience professional cycling up close, but also get on the bike yourself. Borrow a variety of wheels on the carpet and spin a long test round. There are also impressive professional bikes from Chris Froome and Peter Sagan and of course the B Turtle to admire. On both days the race will be broadcast live on the carpet! 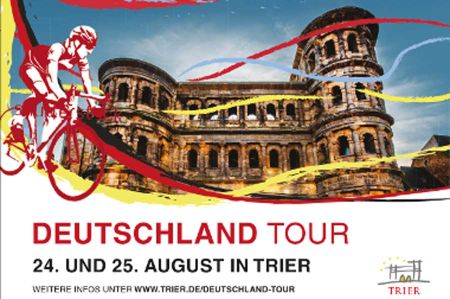 Walter Lescher from Wittlich has photographed the Tour de France since 2004. In keeping with the Germany Tour in Trier, he will exhibit ten of his works on the Flying Grass Carpet. During a slideshow, the amateur photographer tells how the photos were taken and why he was so fascinated by professional cycling. Let's surprise you in our live broadcast, who's in the lead.

We have 313 guests and no members online