The shores of Ohrid Lake have been inhabited since the Neolithic Age (6000 BC), which is impressively documented on the Macedonian side with the perceived pile dwelling settlement at the lake just about 15 kilometers from Pogradec.

The first historical settlers were the Illyrian Encheleans, who lived in the vicinity during the 8th and 7th centuries BC. Around Pogradec they left many traces behind. So on the hill above the city, which was founded by the Illyrians in the 5th century BC. The settlement was the first fortified place and existed until the arrival of the Slavs in the 6th century. At the village Selca e Poshtme several Illyrian royal tombs were found, dating from the 4th to the 1st century BC. They belonged to the ancient city of Pelion, which was destroyed in 547/548 AD by the Slavs. In the 10th century the settlement was abandoned on the hill above the town and today the new town Pogradec was founded. At the same time, the hill was rebuilt by Bulgarians. The earliest known settlement of the place took place in the Neolithic and culminated in the later Iron Age under the Illyrian tribe of the Enchelae and in the Roman Empire in an urban development. From the 4th - 1st century BC, the city was probably the royal seat and therefore an important political and economic center. The Roman Via Egnatia once passed the city of Pelion in the direction of Ohrid, Bitola, Edessa and Thessalonica, to the west to Elbasan and Durres.
The town was established on the right bank of the river Shkumbin, on about 795 m above sea level. Ruins are still visitable on a high hill, there are remains of Pelion and the associated necropolis. Around 570/550 BC the city of Selca IV, which is represented by traces of burnt huts, found ceramics, local pottery turntables and Ionian and Corinthian imported goods in the lower horizon, was slowly formed. In the upper horizon there were local, red-brown painted ceramics, turntables with two handles as well as Ionic and Attic goods. The local ceramic manufacturers especially like to imitate Greek models. The settlement stretched to six hectares and reached a size of seven to eight hectares in its main phase (3rd to 1st century BC). In order to make a development of the terrains possible, terraces were created. In the 4th and 3rd century, the site was surrounded by a wall that enclosed just the Acropolis, but not the populated terraces.

The Romans build the first city wall of ashlars 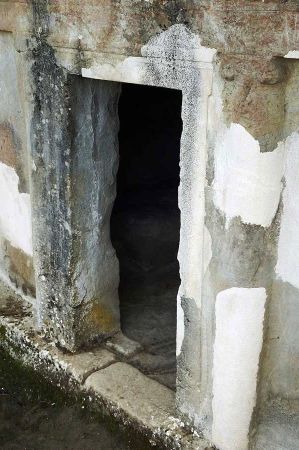 In Roman times, in the 2nd and 1st century BC and later in the 3rd century BC, a wall of rectangular stone blocks was built to protect a larger area. In late antiquity the place was, from the 4th to 6th century AD, reduced to two hectares of populated area. For the construction of houses stones of the ancient Roman ashlar wall were used at that time. On the basis of coin finds two horizons can be determined. The first dates from the time of Valentinian I (364 - 375 AD), the second dates from the time of Justinian I (518 - 565 AD). Around 547/548 AD, the city, which had lost its economic and political importance, was conquered by the Slavs.

The hill with the archaeological site and the tombs are on the right below the summit. From 1969 to 1972 excavations under the direction of Neritan Ceka took place here. The city has five colonization layers. Selca I to III belongs to the protourban phase and is divided into: late Neolithic, early Bronze Age and late Bronze Age, all represented by various ceramic forms. From the Iron Age on, one can speak of a permanent settlement. Since 1996, the gravesite has been on the tentative list of the UNESCO World Heritage. The Albanian Government proposes to include the site in the UNESCO World Heritage List.
During excavations, roof structures were partially placed over the graves to protect them from weathering. It was already warned that the cultural monument threatens the destruction, because the state has not done anything for years for the protection and maintenance.
Because of its seclusion, the place Selca and thus the graves was hardly accessible for a long time and is therefore rarely visited by tourists. Today, a mostly paved road that goes from the SH 3 at Përrenjas at the foot of the pass Qafë Thana, to the hill above the village. It is from Përrenjas about 15 kilometers on small side roads to the south. Visitors are still very rare. The complex can be visited without admission.