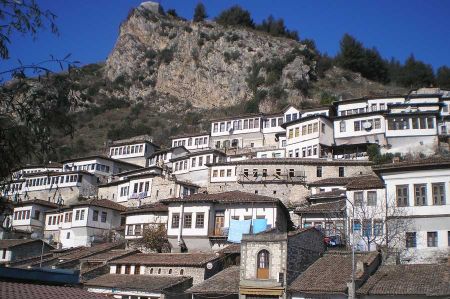 Comparable to Apollonia, the Albanian city of Berat can look back on a historical development as a protohistoric abode for many centuries, so traces of ancient cultures have been found since about 2600 BC.

The castle hill of Berat was built in the 4th century BC. First established by the Illyrians as the settlement center of the Illyrian tribe of the Dassareten. These got, at the end of the 4th century, in the dependence of the Kingdom of Macedonia. Presumably it was Cassander, who rebuilt the old town as a city and settled Greek settlers. In honor of his father, he called the city Antipetreia. Even under the rule of the Romans the city flourished.

The first written mention of the city, which was in Greek called Poulcheriopólis, dates back to the 9th century and means "beautiful city". In 1019, the Slavic name Belagradon first appeared, which is the translation of the older name and means "white city".

In the 9th to 11th century, the Bulgarians occupied the region. Even at this time Berat was Orthodox bishopric. The eparchy was subordinate to the metropolitan of the archbishopric Ohrid. Two early Christian relics are the two manuscripts Codex Beratinus 1 and Codex Beratinus 2, which are more than 1000 years old, but today are kept in Tirana.

In 1018 the Byzantines conquered the city. As a result, Berat came under changing rule of local despots, the kings of Naples, the Bulgarians and the Serbs. In the spring of 1281, the Byzantine Emperor Michael VIII, who ruled the city since 1274, decisively defeated the army of Charles I of Naples before Berat and stopped the further expansion of the Anjou east of the Adriatic.

The Ottomans prevail against Skanderbeg 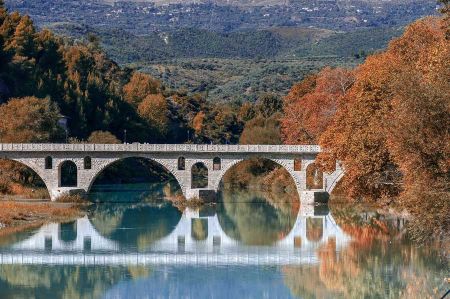 In 1417 the Ottomans occupied the city for the first time. In the 1420s, the noble family Muzaka held the rule of Berat. Theodor von Muzaka, a fellow Skanderbegs in the League of Lezha, lost the city in 1450 by a surprise attack by the Turks. The besieged by Skanderbeg 1455 siege of Berat was unsuccessful in the end.

The city was initially built as a fortress on the rocky hill of 187 m above sea level where the river Osum penetrates through a bottleneck in the valley in the Central Albanian Plain Myzeqe. The castle towers above this strategic location, which not only consists of fortified buildings, but also encompasses an entire district with numerous churches and mosques. On the opposite bank is the historic district of Gorica. Below the castle stretches the district of Mangalem and the current city center. In the north of the city, new quarters with numerous prefabricated buildings were built during the communist era.

Under the Ottoman rule, Berat was the seat of a Sanjak Bey and a regional trade center. Both the Muslims and the Orthodox Church maintained important schools in the city.

There are historical recordings about Berat by Evliya Çelebi 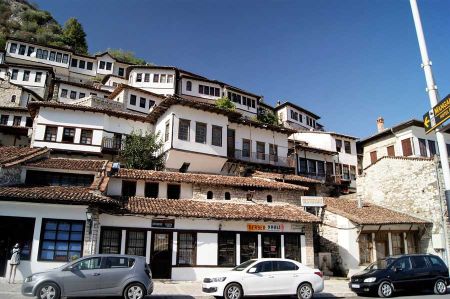 In November 1670, the Turkish traveler Evliya Çelebi visited, inter alia, the city of Berat. It was the seat of Bey from Vlora and had 489 fiefs (Turkish Tımar). In addition to 5000 stone houses covered with red tiles, he counted 100 magnificent mansions with cisterns and fountains. Berat was divided into 30 quarters, and as so often, Çelebi describes quite the fortress and the citadel of the city extensively.

In 1809 Tepedelenli Ali Pasha was able to annex the city for a short time to his dominion. As a local governor, he used his son Myftar. In 1822, the Ottoman sultan conquered Berat again after Ali Pasha had fallen victim to an assassination attempt.

In 1851 Berat was shaken by a strong earthquake. The buildings erected shortly after characterizing the appearance of the historic districts, and the consultant cityscape is still shaped by Ottoman architecture to this day, a comparable architecture to that can be found, for example, in Gjirokastra and Ohrid. Many cultural assets such as the Mosque of Lead or the Hysen Pasha Mosque have been renovated in recent years. 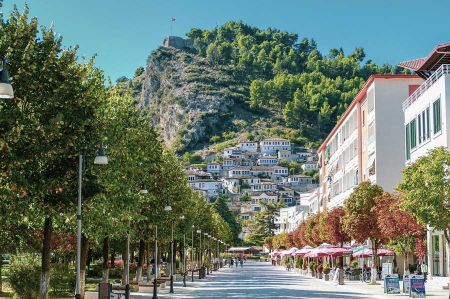 In 1903 there was an uprising of the population in the city. The inhabitants demanded a reduction of the high taxes and the occupation of the city offices with Albanians instead of Ottomans.

In October 1944, a "Democratic government" was formed in Berat with Enver Hoxha as prime minister, after the partisans had expelled the German troops from the city on 13 September.

In 2008, the old town of Berat was added to the UNESCO World Heritage List. There she is now led together with Gjirokastra as examples of the preservation of an Ottoman city and the coexistence of different cultures.