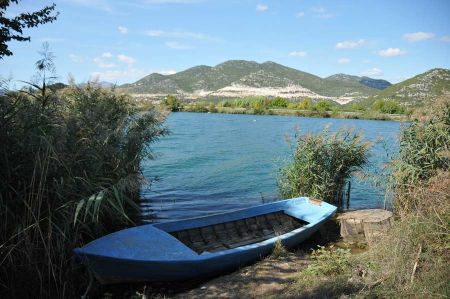 Once again we were on the road to follow some directions to places of interest. Coming from Omis along the coast, we first wanted to visit the newly built museum at the ancient Roman market town Narona, as well as the village Vid itself, which has arisen on the ruins after leaving the trading venue Narona.

This time we were not just interested in Roman cultural history but also in the important fruit-growing area, which is accessed via canals and typical boats of the region. For this, the waters and canals of the Neretva river are so famous and used until today since Roman times on the river Norin.

Of course, we also wanted to take advantage of the beautiful weather that promised more great shots along the coast. So it was clear that there should be a first stopover on the section of the high coastal road there in Pisak because of the views of the coastline, the sea and the mountain range acts especially impressive here. It should also be mentioned at this point that there is a beautifully situated well signposted trail along the coast, as it is easy to see in the pictures next to the parking lot.

But then we continued. This time we took advantage of the mountain pass, because we wanted to get to know the German-sounding "hinterland" in more details. Spectacular scenery and small mountain villages lined up for many kilometers until it went down again into the plain at the mouth of the Neretva Delta. Now there were seemingly endless mandarin orchards to the right of the road that were still green, but already harvested. To our left the mighty Neretva River. We briefly stopped at one of the many fruit stands at the roadside, almost like in Turkey, there is a thriving direct marketing by a part of the family.

Along the river, then crossing a bridge, we finally reached our destination Vid. In the attached photo of the location plan, a small section of so many channels can already be seen that often run between the rows of fruit trees. This is also the reason for slow onset tourism because comparable to the known Farmhouse tourism, active vacationers come here to help to harvest. If that does not fit to your plan of holiday, there are boat tours with the typical barges, which invites the tourists over the Norin or one of the many canals for a boat round trip, usually ending with the conclusion of a hearty fish food, because the bay and the river Neretva known for some seafood specialties.

So, at this point eel should be mentioned, which grows in huge amounts in the numerous channels and is offered in fried form, as well as the really tasty Dorade, which goes back to the bay where there is a mix of salt and freshwater and therefore fish grows in a special water quality. There is also an endemic Shrimp here due to the mixing water of excellent quality. We joined the practice of ending our stay at Vid and even lingered for a while in one of the numerous restaurants.

Then we went back to our campsite Camp Galep, just in time to experience a fantastic sunset. Another eventful day is coming to an end.

Tombstones - Stecci at the wayside to Imotski