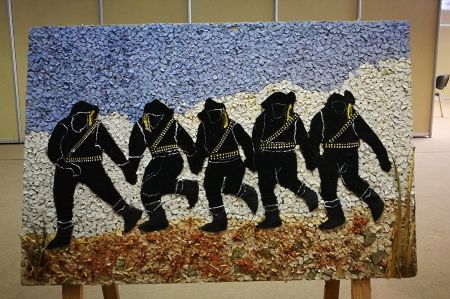 Although the composition of the individual fairs seemed somewhat surprising at first, the overall impression of the Thessalonica fair was getting more clear. The separate halls in the huge exhibition grounds under the radio tower played a considerable part in this.

Motorcycle fair in halls 17 and 3, flowers and shrubs in the outdoor areas, literature and recycling in halls 14 and 15, where the special exhibition of recycling and art was particularly interesting to us, especially since there were really meaningful exhibits.

Prior to the great industrialization of the eighteenth century, garbage mainly consisted of the excrements of humans and animals, food waste, clay or glass shards and probably also ash from the fire places. Probably the oldest form of recycling is the traditional use of fertilizer for plant and animal waste, in particular the most serious manure, in agriculture, which is probably as old as itself. The complete recycling development is the basis of the so-called subsistence economy.

In ancient Rome the excrements were collected and sold to the farmers in the surrounding area as fertilizer. In the Middle Ages, this organization fell to a large extent - excrements and waste were partly simply tipped onto the street and only "recycled" by pets. Later, it were scrap and lump collectors who looked for collection, sorting and forwarding of recyclable material. The "throw-away mentality" of the industrial age did not exist because of the lack of goods such as empty bottles, used wood or metal objects and the like. It was self-evident to use these objects further more. From food waste pet food was created, from bones and hair useful things were produced and from rags paper was made. Wood and paper wastes were fumigated and metal parts were melted or re-fused anyway.

It was only with the birth of the Green Movement in the 1970s and 1980s that a rethink was taking place in many countries that waste disposal is one of the main factors of environmental pollution. At the same time there was an awareness about the limited natural resources as a whole. On the other hand, land filling was increasingly unfeasible in urban agglomerations. First beginnings back to a new recycling was the initially voluntary waste separation, which became the symbol of a whole generation in the western world. Out of the use of waste paper reusing, technologies were increasingly being developed which made the reprocessing of all types of existing waste material economically, making waste a major economic asset: the term secondary raw material was shaped for this purpose.

What is the role of recycling and / or sustainability in art?

Recycling is an important issue for all of us, as is the case for artists. In this group, however, it is always linked to other discourses. Not every artist recycles exclusively, but, as John Chamberlain has done very early with his scythes, makes something new out of it. Artists deliberately accepted what was already there or used, so minor items as in Pistoletto with his Venus in rags. This is the conscious attitude to interfere with the flow of life, just by taking used materials instead of large materials that need raw materials.

This approach can also be clearly seen in many exhibits of the special exhibition, whether this is driftwood, which was washed on the beach or also scrap of various car surveys. Also, blends of old material with traditional drawing and painting art are exhibited.

Yadegar Asisi - Architect of the Great Panorama of Pergamon

Sepiolite - White Gold from deep in the earth