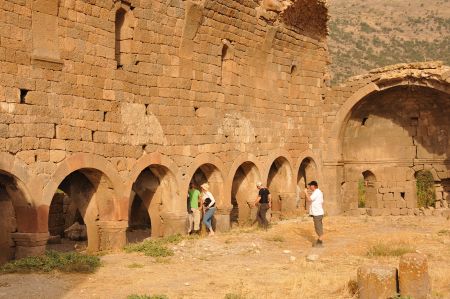 Again and again questions or whole texts about cultural and ancient history of the Greeks and Romans reach us, sometimes they are surprising. Once a clearly recognizable basilica with an apse suddenly becomes a Greek gymnasium, because one probably does not want the rather ecclesiastical character of the basilica, then again it is an amphitheater, a bouleuterion and stadiums that are confusingly described as to be the same.

Here is an attempt to explain a basilica, which is almost easily recognizable by the attached buildings of at least one apse:

If you look at the history of building development, the official residence of the Archon basileus in Athens was traditionally called a basilica, which is why it is often assumed that the building type of the basilica was built in Hellenism and then taken up and adapted by the Romans. However, it was apparently just the invading Romans that Greece received buildings that corresponded to the architectural definition of this concept; Thus, the first datable basilica in Rome by Cato Censorius erected at the Roman Forum to the side of the Curia Hostilia 185 BC, called Basilica Porcia.

In addition, not all ancient basilicas have the same structure as the basilica in architecture. The Maxentius Basilica, with its clearly subdivided aisles,  is more like a huge hall will extra side walls and the Constantine Basilica in Trier, for example, has no aisles at all.

Apse already appeared at the ancient basilicas. In the buildings or constructions often used as market and court halls, they served to house a portrait of a ruler.
The apse form comes from the Exedra and Tribuna of the Greek profane and Roman sacred and secular buildings. Not infrequently, the longitudinal axis of Roman basilicas was marked by two opposite apses (Volubilis, Leptis Magna) - a constellation that is still reflected in some important medieval churches.

In ancient architecture, niches are often used as building elements to highlight parts of a room, as architectural decoration and as frames (aedicula) for statues and sculptures. The basilicas of the Roman Empire often have an apse at one end for the imperial statue. Thus, the apse can also be understood as a figure niche. A continuous orientation of the apses is not found in ancient buildings, although an east-west orientation in the arrangement on the land is gradually established.