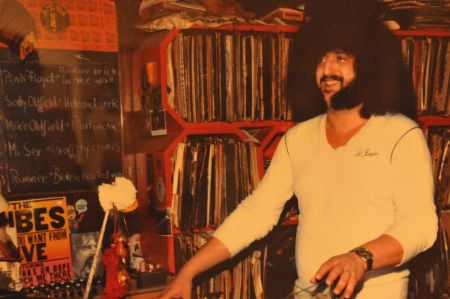 The visit to Jever had led us to the Castle Museum, which is known as a cultural history museum due to its lifelike exhibitions and rooms of the late Middle Ages and the following centuries which artifacts are well known far beyond the city limits of Jever.

Another article showing the variety of exhibition accompanied by a series of pictures will follow. A very special highlight was awaiting us at the end of the tour through the museum, which has in between become a special attraction magnet of the Castle Museum of Jever: the contemporary younger history of the 70s and 80s of 19th century with a focus on the discotheque, hippie and music scene and its key players from the north of Lower Saxony, which initially skeptically appraised in 2007, but then had been inaugurated. As the stream of visitors grew steadily then, a permanent exhibition followed the first exhibition planned for a certain period of time.

Actually, sustained interest of visitors in the museum meant that the exhibition "Break On Through To The Other Side - dance floor, music clubs and discotheques in Weser-Ems" supported by the landscape authority is continued. With more than 100,000 visitors since September 2007, countless feedback and a second edition of a specially issued catalog the project on the history of local youth, music and leisure culture, the exhibition is a great success for all participants.

The exhibition fundamentally deals with the cities that were associated mainly with rock and roll, beat and rock music and often is circumscribed by terms such as progressive, underground or subculture. Why such a culture could develop in the north, which could draw countless number of young people from all over Germany and from Berlin all the weekend, is still unclear. Many of these localities of the Weser-Ems-area, which are increasingly forgotten or already do no longer exist anymore, are comprehensively portrayed. For example, the Old Inn on the outskirts of Aurich, the old Fehnhaus in Ostgroßefehn, the Whisky A GOGO in Wittmund, the successor company of the legendary "Oldtimer" Schortens with the "Newtimer" in Zetel or the Tiffany, the Etzhorner Krug, the Ede Wolf, the Renaissance all once existed in Oldenburg, as well as the Scala and the Charts in the Oldenburger Münsterland. Here the various facets of the phenomenon "disco" are traced because regardless of its orientation the "disco" is not just a place that was visited by young people to dance, but it was on the contrary a complex overall structure of music, fashion and lifestyle. Especially in the 1970s and '80s music clubs and discos were places where youth took place.

We had used the opportunity with the regional legendary DJ and owner of the "Whiskey" in Wittmund, Silverio de Luca, to get an exclusive tour through the exhibition and thanks to his incredibly long participation insight this cultural heritage of rock and contemporary history, we could get lot of information from one of the origns. In his "shop", as he himself describes his disco, numerous celebrities came as guests, as well as the designated German President Wulff.

The Whisky A GOGO was opened in June 1971 at the time initially without Rio. His entry into the story began in November 1971 when he came for the first time to a four-week appearance as guest DJ to Wittmund. After he went back to Dortmund to continue his profession in various discos. After several months of absence, however, Rio received the one-time offer, to take over the bar completely and because he liked it so much the time, he accepted the offer, as happened on 1 June 1972, to take over the place into his responsibility.

As a good omen, so Rio, I got a piglet my 1st birthday in Wittmund. "Grete" felt quite comfortable at the whiskey (until we had a lovely barbeque ...)! In 1973 I got the best of all to learn my present wife Julie. What luck, what a, "dolce vita". The wild seventies passed quickly, with whiskey and rock'n'roll sound. In December 1987, more than 50 liters of brandy and raisins were prepared ("Beansoup" it is called), our daughter Myrna was born.

But quickly back to the exhibition now. In addition to many exhibition accessories from the 70s and 80s, authentic materials of many well-known places of that time like nightclubs Whisky A GOGO, Meta and Old Inn or better the hangouts of the hippie culture is shown. Finally in the 70s, Friesland was the "center of the world", at least what music culture and hippie concerned. And music plays a central role in the exhibition. So the visitor can listen to more than 20 live and studio recordings of various beat bands from the Weser-Ems region in the 1960s. All recordings are previously unreleased and in the relevant Beat scene largely unknown.

An information terminal with a choice of music, which was collected by DJ by her former program, making encounters with the musical horizon of time possible. So music will be heard by Otto Sell's "Playlist" from the Ede Wolf, from the top 100 after Wolfgang Schoenberg of the Scala and a selection of Rainer Urbschat from the multi-line program of the Renaissance.

"Sounds of the Underground in Weser-Ems" Temporary exhibition for discos culture, the exhibition was supplemented with LPs of the time 1966-1976. With the presentation of 180 LPs and a backing group, the Museum Jever wanted to serve the many requests for the music of that period, that are mainly little documented of what the (rock) musical events in the "alternative" discos of the local region of the outgoing 1960s and 1970shad been.

And Rio? Yes, he is still there! Today, his Whisky is open on 2 days a week (Fridays and Saturdays) from 22 clock. "I'd like to reopen at 19 o´clock, as before, but the times have changed," Rio says thoughtfully. Meanwhile, the third generation is growing up in the Whiskey and the now 68 year-old Rio can still not see a reason to quit.