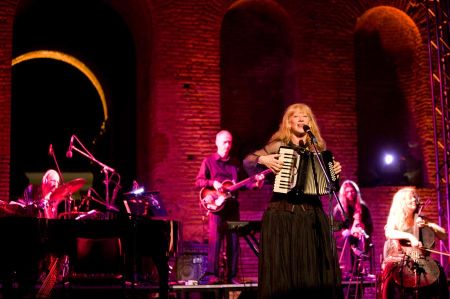 Thanks to the motorway connection, it is only a good hour from the Rhine Falls in Schaffhausen to Zurich. The city of Zurich itself is initially a bit difficult for us as newcomers, because despite several inquiries we cannot find out exactly where the Kongresshaus Zurich is located.

Since the time until the interview date is already pressing, it gets a bit hectic for a moment. A phone call to our friend Beat brings salvation, since we don't have a sat nav, he guides us to the concert hall in the Kongresshaus using Google maps on our home PC and location information on our cell phones. We had previously followed the instructions of passers-by, who, however, had sent us to the wrong shore of the lake.

Nevertheless, we arrived at the Kongresshaus on time. Patrick found a parking space straight away and so we made our way to the interview with Loreena McKennitt. 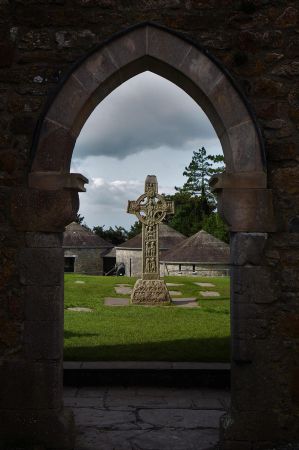 We were lucky that we met one of the Irish backstage coordinators directly in the hall, and we immediately presented our concerns to him. He heard with interest that we were from Turkey and immediately asked for a business card, as he was interested in purchasing a property on the Aegean. An interesting conversation ensued while we were led to the responsible coordinator of Quinlan Road by Loreena McKennitt, Mark McCauley. At first he was a bit surprised that we were there, but that was probably due to the general excitement of the first concert evening of the "Celtic Footprints Tour" in Zurich. After two phone calls everything was settled and we met Loreena McKennitt in front of her changing room. After a short but warm welcome, Mark led us to the magnificent balcony terrace of the Zurich Congress Center, which offers a wonderful view of Lake Zurich. There was a small group of seats here, which we occupied. Mark brought some drinks and we started a relaxed, interesting conversation before the actual interview, in which Loreena reported, among other things, about her Canadian homeland, the surrounding nature and her experiences as an active jogger. After the interview, she wanted to take advantage of the wonderful weather and Lake Zurich for a short jogging trip before the evening concert.

We were able to conduct a really relaxed, very heartfelt interview on the subject of "The Celts" and of course their tour "Celtic Footprints Tour", which we will also publish shortly on the Alaturka portal. After about an hour we said goodbye to Loreena and of course wished them every success for the sold-out concert evening at the opening of the tour in Zurich. Back in the hallway we also said goodbye to Mark, who promised to deposit the tickets for the evening concert at the box office. 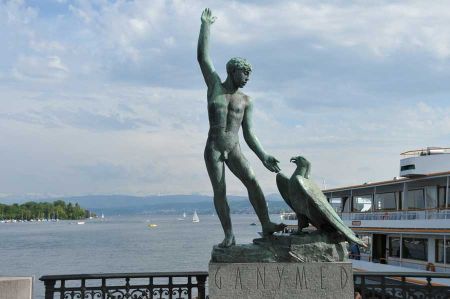 We then met Patrick on the lake shore, who in the meantime had taken a walk along Lake Zurich and had decided to go back to Strasbourg on the same day. Patrick took us to the apartment of Beat and Sebnem, our long-time friends, and drove back home, despite their invitation to stay in Wädenswil for dinner and the night. As a seasoned paraglider, Patrick simply feels better in the skies above Alsace or the Black Forest.

Before dinner there was still time for some small purchases, which also brought us a little closer to the town of Wädenswil. That's how we got to know the train station and the train schedules for the evening, because we wanted to use the train for the concert, which led almost directly to the concert hall. It's great when you have friends on site who can explain and explain the local conditions to you, so that you can be on the road without a lot of searching and asking questions. Since we had to fly back to Antalya the next day, we bought a 24-hour ticket that would also take us to Zurich Airport the next day.

We were at the train station in good time and chose a window seat, because the train line always runs along the shore of Lake Zurich to the city center. From here it was a good five minutes' walk to the concert hall. In the foyer we received the deposited tickets for the sold-out concert and additional tickets for the after-show party, which was to take place on a small scale after the show.

And it was supposed to be a wonderful concert evening: excellent musicians on a wide variety of instruments, some on historical instruments, a cheerful, inspiring Loreena McKennitt, ...... simply great!

From July there will be his second concert tour by Loreena McKennitt, whose tour dates can be found here: "A Midsummer Nights Tour".  Actual tour dates you will find here!

After a wonderful evening with "cult, mystical" music, we went back to Wädenswil by train late in the evening, where Beat and Sebnem were already waiting for our report. So it turned out to be a long night.

After a wonderful breakfast we spent the rest of the Sunday telling stories about our previous experiences, which had taken us from Brussels, via Trier, Strasburg, Rottweil and Schaffhausen to Zurich. A short, but extremely interesting trip, which ultimately served to prepare the tour "Cultural trip along Roman roads".

Passengers at the piano - at Paris Charles de Gaulle Airport

Few more interesting insights about the fortress of Kruja