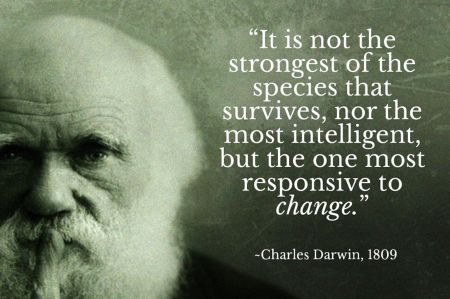 A theory of evolution is understood to mean the scientific and in principle coherent description of the formation and alteration of the biological units, especially the species, as a result of organismic evolution, the development process in the course of the earth's history, which has taken place and continues.

"The human being is from the monkey!" This is probably the most striking and well-known statement, which is associated with evolution and which reduces the theory of evolution to a single provocation.
Why do we get angry, why does it excite us when someone says "man is from the apes" but not because of the statement "Man is made of earth"? Isn't that at least a provocation too?
How can the value, the pride, and the dignity of man be deduced?

Evolutionary theories are, of course, a product of the time of their origin and reflect the respective findings, the facts and the scientific approaches of the time.

Since modern evolutionary biology is concerned with numerous, sometimes very different approaches and analyzes, where temporary hypotheses are designed and later partly abandoned in favor of refined hypotheses, it is now agreed that one should not speak of a real and all-embracing "evolution theory" But that there certainly is a theory where many strands of knowledge flow from paleontology to molecular biology and complement each other as a whole.

Vague ideas about how or where life arose were already expressed by scholars of ancient Greece. Thales of Miletus suspected the origin of life in the water, Anaximander spoke directly of a primordial creation in humid surroundings, and Aristotle suspected the origin in mud and dirt. Judaism, Christianity and Islam were based on a divine act of creation and represented the concept of a kind of consistency, followed by many scholars in Europe and Asia Minor until the Enlightenment. All these hypotheses seemed to be more or less convincing in their respective times, taking into account the knowledge at that time.

Jean-Baptiste de Lamarck (1744-1829) proposed a theory building of species change in 1809 and was thus one of the first evolutionary theorists. It was based on an inheritance of acquired characteristics, a mode of observation, which was still widespread in the nineteenth century (before the knowledge of the foundations of genetics). Even Charles Darwin, 50 years later (1859), assumed that acquired qualities could be passed on.

Charles Darwin (1809-1882) designed his theory as early as 1838, but because of the not very open-minded environment in his home country and also because he regarded many cognitions as hypotheses, these were first presented 20 years later (1858) and released the following year (1859). His theories were based on broad biological and natural sciences as far as they were known at that time. At the same time a younger zoology, Alfred Russel Wallace (1823-1913), came to very similar conclusions. Both works, which were soon referred to as Darwinism or Darwinian theory of evolution, probably arisen completely or largely independent of each other. Differences in content concerned, for example, the question of how intensively the different evolutionary factors affect and which are decisive. Biological evolution both explained by the better adaptation of all organisms to their environment and thus a gradual increase in complexity.

The Turkish-Islamic Association ATIB in Austria has, as one of the first, distanced itself from the decision of the Turkish government to remove Charles Darwin's theory of evolution from the legal school curricula. According to ATIB spokesman Selfet Yilmaz, one does not agree "on this question".

"We do not want to play science and religion against each other," Yilmaz continued. "The theory of evolution belongs to our opinion and should be taught." The organization ATIB, to which dozens of mosque associations belong in Austria, is a facility of the state Turkish religious authority Diyanet, comparable to the German DITIB.

From the coming school year Charles Darwin's theory of evolution is to be deleted from the Turkish school plans. The theory of evolution is "controversial" and not suitable for students, the Turkish government decided. The strike action is presented by the Islamic-conservative government of President Recep Tayyip Erdogan as a step towards an alleged modernization of the education system.

The basic principles of Darwin's theory of the natural development of species in science are anything but controversial. Representatives of Creationism among the followers of different religions, including Islam and Christianity, see this as a contradiction to the idea of "divine creation."

Turkey's new school curriculum drops Charles Darwin's theory of evolution and adds the concept of jihad as patriotic in spirit.

The chairman of a teachers' union has described the changes as a huge step in the wrong direction for Turkey's schools and an attempt to avoid raising "generations who ask questions".

Turkey´s Chief Justice: If that is Islam, I am not Muslim