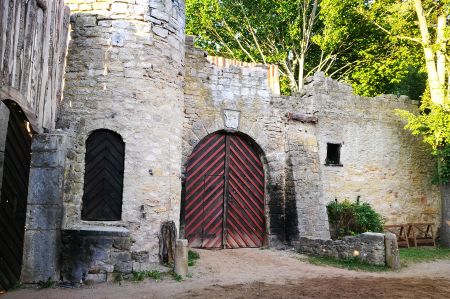 The Franconian small town of Giebelstadt is probably named after the Alemannian nobility of the Gibule and was mentioned in the year 820 for the first time.

In the 13th and 14th century, the ministerial families of the Geyer and Zobel held property and fiefdoms and practiced the mediaeval rights of the church and church princes in the village, typical for the time. The ruins of the Geyser castle until now bear witness to this period, which now constituted the stage of the open-air theater performance. Later, the families of Geyer and Zobel became followers of the bishops of Würzburg, from whom they received their tribunal, the Lower Castle of Giebelstadt, and other important estates in the area as fiefs.

One of the best-known representatives of the family was Florian Geyer, a Franconian knight, military commander in the service of Margrave Albrecht of Brandenburg-Ansbach and diplomat, who was born around 1490. He supported the insurgent farmers financially and militarily during the peasant war, and took over the leadership of the so-called "Tauberhaufen" in the peasant war in 1525. This is largely the background to the performance of the episode "The Power of Blood" from the life of Knight Florian Geyer, which we were able to experience in the open-air theater of Giebelstadt. Non professional actors from the village and the surrounding area play the evil stories of the gruesome Middle Ages around intrigues and political connections, in order to suppress oppression and exploitation in historical dresses very colorful. The performance is brought to life by the horses' passages, which are always used again and again. Perhaps some more details on the background story:

Coming from the Franconian nobility Geyer von Giebelstadt, Florian Geyer was born as the youngest of three brothers. After his father Dietrich and his two older brothers had died, he inherited a considerable fortune and extensive landscapes, which from then on allowed him a life free from financial worries.

From 1512 to 1513 he traveled to and stayed at Henry VIII. In 1517, he was excommunicated after a coup d'état with the Neumünster collegiate, which demanded a 350-year-old demand without proof, and remained up to his death.

In 1519 he served as lieutenant of the margrave Casimir von Ansbach in the army of the Swabian Confederation as a leader of so called Landsknechte in a punitive expedition against Duke Ulrich of Württemberg and among other things also against the official in Möckmühl, Götz von Berlichingen.
This year, Geyer, at the request of his lord, entered into the service of his brother, the Grand Master of the Teutonic Order Albrecht of Brandenburg-Ansbach, to assist him in an impending confrontation with the Kingdom of Poland as an experienced chief. Until 1523, he served as a military commander in the service of the mayor, for whom, when the military situation unfavored, he visited the courtyards of Europe on a diplomatic mission.

In 1520 he entered into armistice negotiations with Poland, and in 1523 he took part in the negotiations of Schweinfurt's day. In the same year he accompanied his prince to a conversation with Martin Luther in Wittenberg.
At the outbreak of the peasant war in 1525, Florian Geyer worked as a consultant and negotiator of the Tauber farmer.

He supported the organization of the peasant's army and helped to develop strategic principles. He succeeded as a subcontractor in winning several smaller cities, including Rothenburg ob der Tauber. He conducted negotiations with Wurzburg and the margrave Kasimir of Brandenburg-Ansbach-Bayreuth. His aim in the struggle against the Principality was a reform of the Reich based on peasant and bourgeoisie, especially the elimination of spiritual and noble privileges with the Lutheran doctrine as a moral foundation. However, Geyer was unable to assert himself with the radicalized peasants with his moderate view, and often came to suspicion because of his aristocratic origin.

It was only when the troops of the Swabian League, under Georg Truchsess of Waldburg-Zeil, set themselves against the peasants, and gave them their first heavy defeats, on the advice of Geyers, an attempt was made to negotiate a peace under the intermediary of his former lord. Geyer traveled to Rothenburg to await Kasimir's escort. After the defeat of the peasants in the decision-making battle at Ingolstadt in Unterfranken and Königshofen, Geyer, who was still waiting for the escort, was expelled from the town of Rothenburg by the city council, and rode to the north alone.

On the night of June 9th, 1525, Geyer was robbed and stabbed by two servants, Wilhelm von Grumbach, in the Gramschatz Forest near Würzburg; However, clear evidence of this is not known. The whereabouts of his corpse as well as the position of his grave are unknown.
Gerhart Hauptmann created a drama based on this story called "Florian Geyer" in 1894/1895.