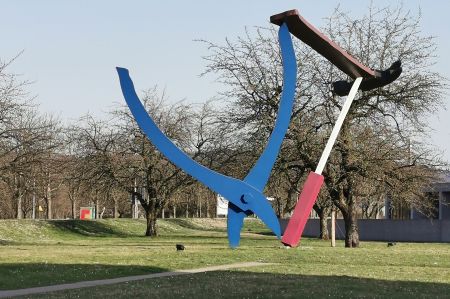 After our initial enthusiasm during the visit to the Chair Museum, we were now interested in seeing the entire Vitra premises.

Once again, however, time had advanced so far that we could not also take part in one of the architectural tours offered here, because the Vitra company has had buildings built by and with world-renowned architects since the 1980s. The unique architectural ensemble includes buildings by Tadao Ando, ​​Frank Gehry, Nicholas Grimshaw, Zaha Hadid, Herzog & de Meuron, SANAA, Álvaro Siza and others. The architecture critic Philip Johnson wrote of the time: »Since the founding of the Weißenhofsiedlung in Stuttgart in 1927, nowhere in the world have more buildings been erected by the most outstanding architects in the western hemisphere. « 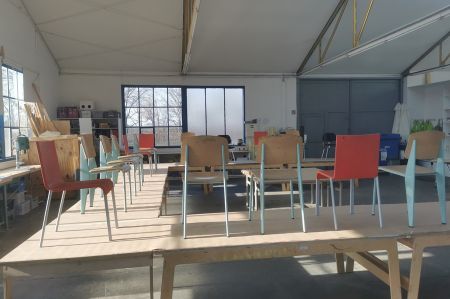 At the age of 20, Willi Fehlbaum took over a shopfitting business in Birsfelden near Basel, which he and his wife Erika continuously expanded into a furniture-making company. In 1950, after the end of the war, he relocated the production facilities to Weil am Rhein in Germany, also close to Basel, and named his company Vitra. On a trip to the USA in 1953, Fehlbaum discovered the exhibits by the designer couple Charles and Ray Eames. He spontaneously applied for the distribution licenses and received the rights to replicate the Herman Miller seating, whose furniture was already highly regarded in the USA at the time. The contract included the designs of the Eames and George Nelson. The chairs and loungers by Charles and Ray Eames are still among the company's most successful products. A large part of the non-written legacy of the two furniture designers has been owned by Vitra since 1988.

Vitra Campus - an architecturally valuable site is being created 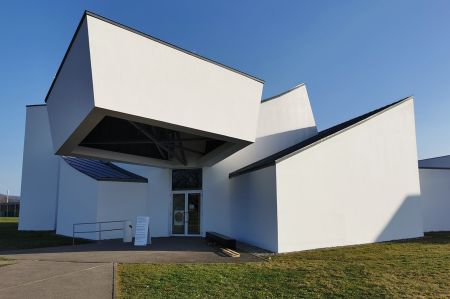 The buildings that have already been constructed on the Vitra Campus contrast with one another on the one hand, but at the same time blend in harmoniously with the surroundings. They reflect a corporate philosophy that does not look for a uniform company architecture, but promotes different positions as an open project. In the VitraHaus - Vitra's flagship store - the entire Vitra Home Collection is presented: from the great classics to the latest designs by contemporary designers. The furniture and objects on display can be tried out, ordered and bought on site. Please note that many buildings on the Vitra Campus can only be visited as part of an architectural tour. Accordingly, the Vitra Campus is divided into a public and a non-public area. In the public area are the Vitra Design Museum, the VitraHaus and the Vitra slide tower (here we published another article) on the Álvaro-Siza-Promenade as well as the Vitra Schaudepot. The non-public area, the actual factory premises, can only be visited as part of the architecture tour already mentioned. 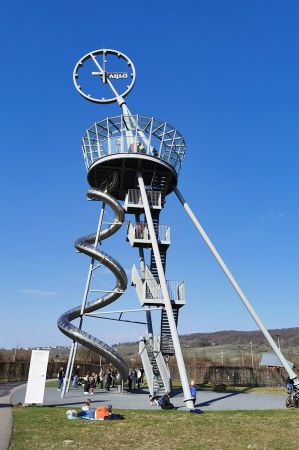 The main building of the Vitra Design Museum was designed by American architect Frank Gehry and was his first project in Europe. While Gehry's earlier buildings were still associated with the pictorial language of postmodernism, the architect of the Vitra Design Museum limited himself to a white plastered facade, a zinc roof and a cubature of simple, basic geometric shapes. From these almost classical-looking elements he created a dynamic sculpture in which the individual structures seem to splinter and start moving. The aesthetics of the Vitra Design Museum contributed significantly to the emergence of the stylistic term "deconstructivism" and heralded a new phase in Gehry's work, which continued in his major projects in the years that followed (such as the Guggenheim Museum Bilbao, 1996).

Inside, the Vitra Design Museum has 4 large exhibition halls with even, white walls and around 700 square meters of exhibition space. The main source of light is a central skylight, the cross shape of which can also be seen from the outside as the centre of the building's composition. The diagonal structures, which are so striking from the outside, house the stairwells. The expressive exterior forms of the building are therefore definitely functional and meet the requirements of a complex museum building. With this, Gehry succeeded in connecting two fundamentally different types of museum architecture in the Vitra Design Museum. On the one hand, the building is a surprising reinterpretation of the "white cube", which offers a restrained setting for the presentation of exhibits. From the outside, however, it is designed as a pictorial building sculpture, which quickly helped the Vitra Design Museum to gain international fame.

Even without the architectural tour, we were enthusiastic about the site, there were so many new things to discover. A worthwhile goal, also for the little ones and the young at heart, because the slide tower is a dream.

Chair museum on the Vitra site in Weil am Rhein