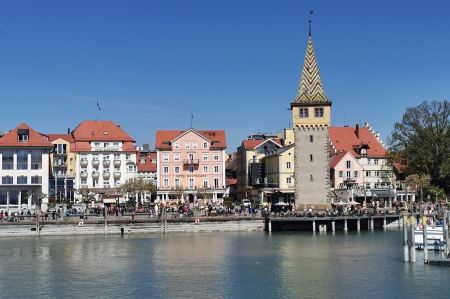 It goes without saying that we wanted to use our stay to explore the city of Lindau itself. The historic old town of Lindau is located, unknown to us before, mainly in the district "Island", an island in the true sense of the word, which has an area of ​​0.68 km² and has around 2800 inhabitants. 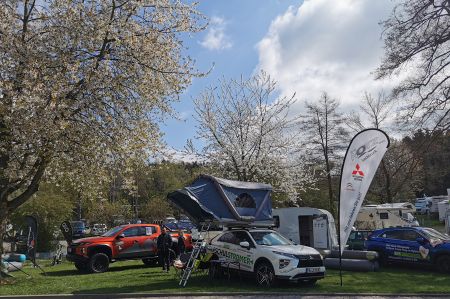 The island used to consist of three sub-islands (Hintere Insel, Hauptinsel and Burg / Römerschanze), the latter not without reason contains a reference to Roman times, which we will discuss in the course of this text. The island is connected to the mainland by a railway embankment and a road bridge.

Lindau also includes the small island of Hoy, which was created in the 1920s as an artificial bathing island. There is also a block of gneiss in shallow water about 40 meters from the so-called Hinteren Insel, popularly known as the Hexenstein. However, this no longer belongs to the urban area. 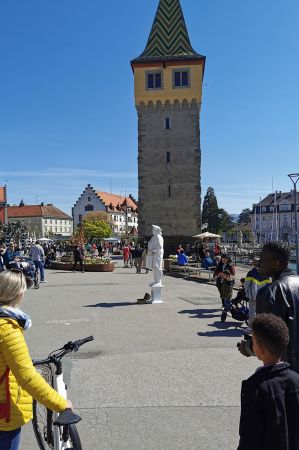 The southern part of the urban area on the mainland is relatively densely built up along the shoreline. Outside of this settlement area are incorporated villages in the northern part, of which Oberreitnau and Unterreitnau are the largest.

The area is mainly used for agriculture, with fruit growing dominating large parts; the meadows and cultivated areas are broken up by forest areas. For the daily drive to the Gitzenweilerhof campsite, we had enjoyed the drive through the fruit trees, which were just in full bloom.

With the mainland districts of Schachen, Aeschach, Reutin and Zech alone (from west to east), the city of Lindau has more than 12 km of Lake Constance shores. The natural shape of the shore of Lake Constance in the Lindau area is a reed belt, followed by wet meadows and rising solid terrain.

Settled by the Romans – Roman redoubt at the port 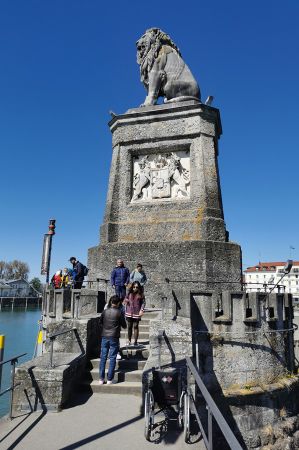 Early traces of settlement in the city area were found on the ridge near the former Catholic cemetery of Aeschach, on the mainland opposite the island. Traces of a Roman settlement were discovered here in 1878 and the foundations of a former villa suburbana were uncovered in 1888. The building with hypocaust heating dates from the 2nd century AD and is now located in the so-called "Römerpark". According to a coin found, a Roman past is also commonly assumed for today's "Römerschanze", one of the three former sub-islands of Lindau, for which the older name "Burg" exists. It is located in the southern port, limits and forms its eastern shore. Although such coin finds are of little significance, it can be assumed as probable that "a natural base like the Lindau Island" served the local Romans and Romans as a place of retreat during the early migration period; 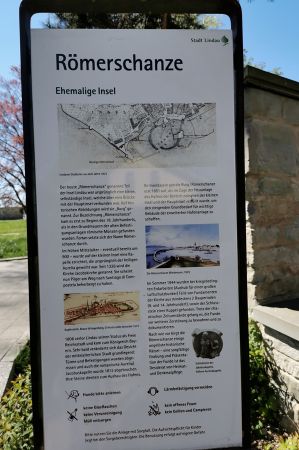 It is underlined by the entrance situation to the old town, described as a “pagan wall”, i.e. a non-Christian wall, on the north-east side of the island, a massive high remnant of a city or gate wall system, built from large square blocks and extending across a corner, clearly based on Roman construction, comparable Regensburg, and therefore structurally both migration period, Germanic period, as well as early Christian construction methods can be excluded. Michel de Montaigne 1580 provides a confirming reference to the first time, the Roman origin of the settlement or city. Quote: “I forgot to mention in the chapter about Lindau that there is a large wall at the entrance to the city, which apparently goes back to antiquity ; I saw no inscription on it, but I hear that in German it means old wall, which is also explained by its Roman origin.” 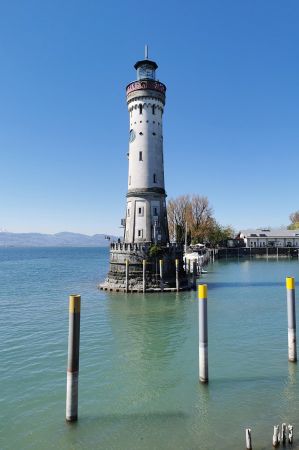 In the course of Tiberius' campaign in the Alps in 16 BC. Ch. mentions Cassius Dio, “We learn more specifically about him that he crossed Lake Constance by ship. According to Strabo - quote: ...Ister (Danube) than the Rhenus (Rhine) and between the two a lake (Lacus Brigantinus / Lake Constance). It also contains an island, which Tiberius used as a base when he fought the Vindelicians in a naval battle... When Tiberius was a day's journey advanced from the lake, he saw the sources of the Ister”. This can be understood as the island of Lindau, because after the victory Tiberius was able to switch to the Vindelicians living there on its northern side immediately. To continue to use this island as a bastion, it was possible to expand it, the remains of which are still represented today by the large "heathen wall" as a protective wall. Protective walls against the north were unavoidable until the end of Roman rule, Zit, T. Fischer: “..made peace with the Alamanni king Makrian... In the spring of 374 the emperor then left Trier and marched across the Rhine knee Basel on the well-known road ... via Arbor Felix (Arbon), Abodiacum (Epfach), Pons Aeni ...".