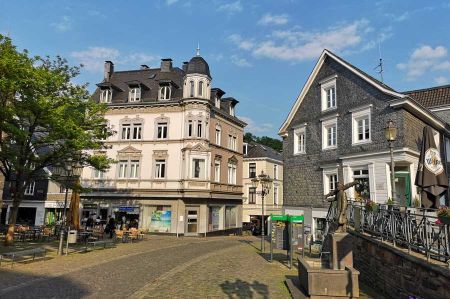 After a few years of abstinence, also due to the complex and sometimes far away leading project work, it finally should allow the time for small tour by motorcycle.

Even it is already 40 years old, we love our sweetheart FJ 1100 and do not want to miss it, even if it is mostly resting. Reliable starting, even after a long winter break, the engine took a few minutes to warm up and off we went.

Destination of the today's exit by motorcycle should be the small town Langenberg, which possesses an old town with slate-covered houses in framework construction method typical for the region. Apart from that, the sunny weather also attracted a visit to the local ice cream parlor, which enjoys a good reputation for its quality. We parked the motorcycle at the entrance to the town and turned towards the city center.

On the way to the slate-covered old town of Langenberg 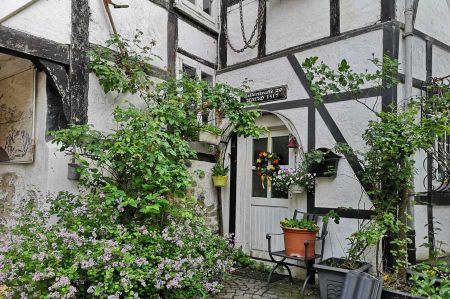 We noticed a rather complex building on the left side of the cobblestone street, especially as the wide entrance gate enticed us inside. The townhouse, as a present young lady explained to us about the meaning and purpose of the building, had been a gift from Adalbert and Sophie Colsman to the city of Langenberg, was built during the years 1913-1917, the name of the architect was Arno Eugen Fritsche. The large hall, impressive in its dimensions, is equipped with a concert organ, the small hall is called the Bergische Room. Today, there are numerous events happening in the building, ranging from musical events to theater performances and readings. Once there was even a sports hall in the basement.

The historic center around the Old Church with imposing half-timbered houses from the 16th to 18th centuries is simply worth seeing: last but not least, Langenberg participates in the support program of the Land of Historic Town Cores in North Rhine-Westphalia. Around the old town center, mainly in the 18th century, a wreath of factory villas, mostly located in large gardens, has been preserved. Well-known architects from abroad were contracted for the design. The landmark villas with their gardens have been excluded from the scope of the "historic city center".

The center is the hall church 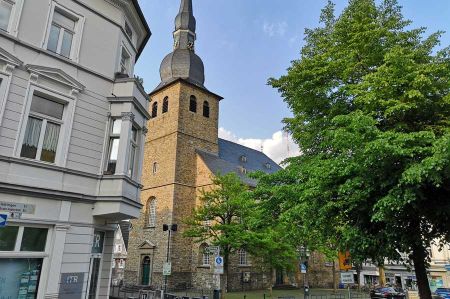 The centerpiece is the Old Church, a hall church for the Reformed community in the style of the Bergisch Baroque, which was rebuilt in 1725 to plans by the architect Johann Michael Moser from Unna, including the Gothic choir end of the 15th century. The richly carved pulpit with lid is a work of the carpenter Arnold Wilhelm Beckmann and represents the position of the word in the Reformed church in place of a high altar. The tower with the characteristic onion dome was completed in 1751.

The Catholic Church of St. Michael, was built between 1899-1900 with red brick in neo-gothic style in place of a first previous building from 1725, the architect was Prelate Joseph Prill from Essen.

The New Church - today it is an "event church", which was built in 1877 according to plans by Julius Carl Raschdorff on the occasion of the union of the Lutheran and the Reformed congregations, as a neo-Romanesque sandstone building. 1899, the interior was redesigned by the Elberfeld office Cornehls and Fritsche from Elberfeld. After 1979, the church's use was abandoned and there were efforts to demolish the church; In the year 2001, after a comprehensive renovation and redesign, the large-scale contradiction led to the conversion as event space. Interesting is also the Silent Park, a former cemetery of the Reformed community with numerous historic gravestones, which was created in 1808 to replace the burial ground around the old church. The morgue was built in 1887 according to plans by Carl Schellen.

Public buildings and their rededication

The former town hall on Hauptstraße 94, was built in 1870 by master builder Wilhelm Bovensiepen from Kupferdreh under Mayor Frowein; a brick building too but planned and built in a round arch style.

The former district court in the main street 112, which was built 1878 by architect Julius Carl Raschdorff from Cologne, is a brick building with elements of the neorenaissance.

Formerly known as local and public pool at Vogteier Strasse 28, it was built in 1897 with funds from the city council. Today, the building serves as a youth center.

The former Reichsbank branch in Kamperstraße, built in 1908; is another, worth seeing building, which was designed by Reichsbank construction director Julius Habicht from Berlin. The Reichsbank branch is a high quality building with influences of the Neuberg style.

Worth visiting are also the Bismarck tower on the Hordtberg, which was built in 1905/1906 to plans by Arno Eugen Fritsche. We wanted to save the climb to the Bismarck tower in the heavy motorcycle clothes for a coming visit, so that we now prefer to devote ourselves to our icecream. A worthwhile short visit.