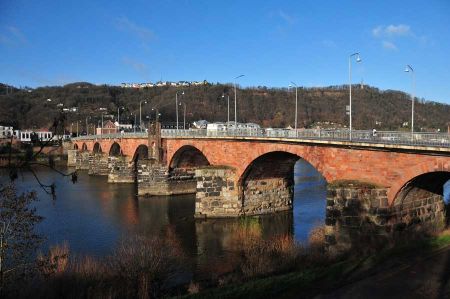 Once again we were in Trier for talks, not at least to extend our project work to expand camper and outdoor tourism as the first destination of the camper route further to the north.

During our last visit we had wanted to visit the ancient Roman bridge, which is also called the Old Moselle Bridge, unfortunately we could not set it up due to time constraints. The one here in Trier, which in Roman times was called Augusta Treverorum, is the oldest bridge in Germany.

Although it was cold on the way to the bridge, just partly the sun flashed through the clouds, so there should be some good photos possible. Full of confidence in the duration of the hours of sunshine, we set off along the Moselle, which also forms part of the Moselle Cycle Path here. Already on the way we came across two distinctive buildings of cranes from long ago, which had been working by manly strength in a large wheel for loading and unloading the ships in the revolving towers. The rope guide of the crane construction wrapped itself in the circumference on the impeller so that even heavy loads could be handled. But more on that later.

A Roman masterpiece - the Moselle Bridge in Trier 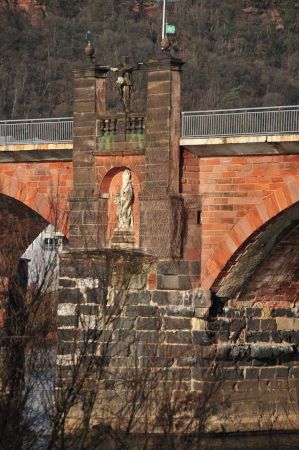 A first Roman Moselle bridge made of wood already existed from about 18 BC. Here it concerned a Pfahljochbrücke; whose piles could be dated to the year of origin by means of dendrochronological investigations, which took place in 1963. The first stone bridge was built in 45 AD a little way down the river from today's site of the Roman bridge, as further dendrochronological investigations have shown. Parts of the pillars can supposedly still be seen at low tide today.

The pillars of today's stone bridge were built between 142 and 150 AD. The new Roman bridge is the third bridge at this point since the city was founded. With the help of watertight sheet pile walls, the Romans built the pillars with basalt and bluestone blocks on the riverbed as foundations. The building material came from the mining area around the former volcano Hohe Buche. The bridge has sharpened pillars upstream to defy flooding and ice much better. On the massive pillars in Roman times a wooden bridge construction, a so-called explosive device, was built. This could withstand a good ten meters wide roadway traffic. Since the road was at normal level about 14 m above the Moselle, the masts of the ships had not to be folded any more, if they sailed downstream. Upstream, they had to be sprinkled because of the strong current.

Porta Nigra as a model for the bridge gate? 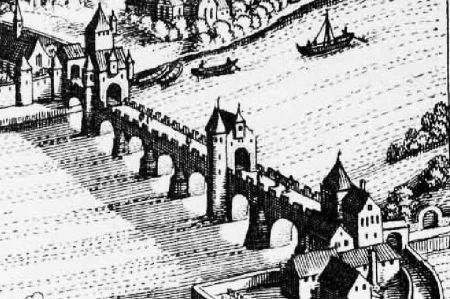 The bridge gate, which was torn down in the Middle Ages, the Porta Inclyta (Famous Gate), remains a mystery to this day. The scientists involved are currently arguing whether the Porta Nigra-like gate was on the left or right side of the Moselle.

The stone vaulting was created in the Middle Ages between 1190 and 1490, possibly under the rulership of Elector Balduin (1307-1354). All nine bridge piers have been preserved to this day; the older assumption that two of these nine pillars were renewed in 1717/18 is not true. The first two on the city side have been hidden in the embankment since a reconstruction in Roman times, as evidenced by the crane stations on the banks of the Moselle.

1689, the bridge was blown up by French troops, 1716-1718 renewed the electoral-Trier court carpenter Johann Georg Judas. On this occasion, a crucifix and a statue of St. Nicholas were erected on the fifth pillar from the west. In 1806 the western bridge gate was demolished and in 1869 the eastern one followed. In 1931, the bridge was widened and received the present, cantilevered pedestrian walkways.

Roman Bridge to slow down the advance of the Americans? 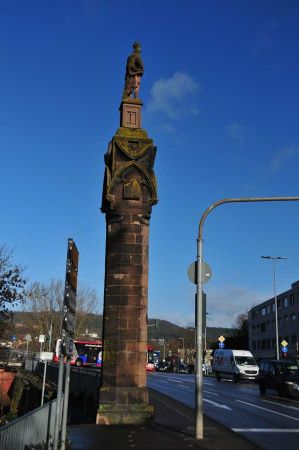 On the morning of 2 March 1945, the Americans were able to reach the unbroken Roman bridge in the direction of Trier-West. The bridge was not blown up for unknown reasons by the German troops. According to an eyewitness, there were already so many debris on the bridge that the cables for the ignition of the explosive charges were probably damaged.

After the Second World War, extensive archaeological investigations took place in the course of the Moselle canalization. In 2012, the city of Trier wrote an architectural competition to redesign the bridge environment and the bridge with the aim of bringing the monument to better advantage. For financial reasons, however, implementation of the proposals is currently hardly possible.

Since 1986, the Roman bridge is part of the UNESCO World Heritage Roman monuments, cathedral and Liebfrauenkirche in Trier.