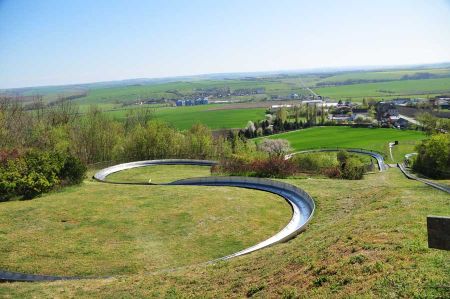 Brilliant sunshine in April had motivated us to take another walk, far away from large numbers of people despite Corona, so in choosing our destination we were sure not to meet anyone, which should also prove to be correct since all of the so-called local attractions were closed anyway.

We wanted to visit the ruins of the medieval castle complex Eckartsburg in order to take advantage of the wonderful weather for some photos. Already the place itself has some sights to offer, as we could read on an information board, good for now, we only wanted to go up to the castle complex, which we had already noticed when visiting the Dutch mill on the opposite mountain range.

At the Eckartsberga entrance, a narrow road climbs slightly to a parking lot that can also be used for other leisure activities on site. We also read that there is a large maze right next to it and a little further towards Eckartsburg there is also a park-like facility on the subject of dinosaurs. We were excited.

Summer toboggan run - no visitors due to Corona 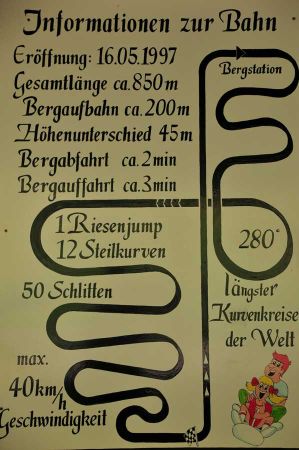 Of course, the maze was also closed, but the size and length of the park and the wrong trails made us spontaneously arrange a visit after the crisis. The large viewing platform was able to arouse our particular interest. After passing through a green area with wooden benches, we reached a building with a rail track that shone metallic in the sun - a summer toboggan run that was immediately added to our “to-do-in-the-future” list. Regardless of whether in self-interest or when the children can visit us again. Everyone would be very interested.

The common forerunners of summer toboggan runs and roller coasters emerged in the 16th century already, surprisingly not in America but in Russia. Artificial mountains made of wood were built there, which in winter were first slid down on ice with sledges, and later with sledges with wheels attached. Until the advent of modern summer toboggan runs, there were also such facilities in Germany; one of the forerunners of this relatively old technology in Ibbenbüren is still in operation today. It is the oldest functional toboggan run in Germany. The toboggan sleds are guided down the slope on a wooden rail.

Summer toboggan run made of stainless steel as standard 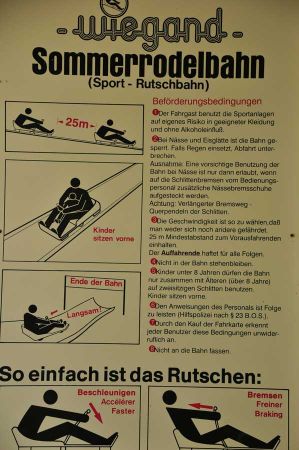 The first modern summer toboggan runs were developed by ski lift operators who were looking for ways to use their facilities in the snow-free months. The pioneers here were Karl Josef Freiherr von Wendt, who developed railways with a fibre cement channel together with the company Mannesmann Fördertechnik, but at the same time Josef Wiegand with stainless steel railways. With the emergence of justified criticism of the fibre cement material due to the asbestos content of the channel, these channels were shut down at the end of 2003.

In 1972 von Wendt opened the first lift with the associated chairlift in Bestwig. This later developed into the Fort Fun Adventure Land amusement park. Wiegand opened the first stainless steel lift in 1975 in its ski and toboggan arena on the Wasserkuppe. The plant, which has since been modified several times, is still operated today.