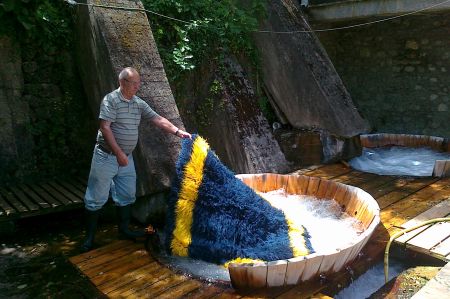 During our introductory discussions Giorgos also told us about one of the many special features in the mountain village of Bourazani, which can be easily reached on foot from the local camper stop: the local watermill, which is also used here for washing the carpets of local residents due to the available water power.

After our first walk along the Aoos with an ever-present, magnificent view into the mountains of the Pindos, we continued the path to the watermill, first following the river, then across the fields to the buildings of the watermill, which is not only operated for the village community for irrigation the fields and power generation, as we should see when entering the plant.

On the grounds of the watermill there is a building, almost a kind of museum, in which the different uses and their history is pointed out. Immediately we noticed two large vats, which were placed with thick planks into a funnel shaped in two concrete basins. At first full of leaves, two valves were opened on the side so that water could flow into the vats at high flow speeds. Quickly, the vats were filled, leaves and other impurities rinsed through the slots between the wooden planks. The laterally offset feeds thus caused a strong turbulence of the water, so that almost the principle of a washing machine is achieved. Now first carpets were thrown into the tubs, which also rotated vigorously through the swirling water.

A hacking rod is used to fish out the carpets

The "carpet scrubber" intervened occasionally in the washing process by turning the rotating carpets with a long wooden stick, which in the end had a natural hoe, until the washing process was complete, based on his experience. One carpet after another was then fished out of the tub and hung on linen to dry.

Unfortunately not in operation was a wooden "hammer mill" right next to the carpet washer. By means of hydropower, a type of paddle system is driven here, which provides for the up and down of hammered surfaces made of wood, which are used for softening and processing of soaked woolen fabrics, from which the water is repeatedly squeezed out by the "hammer blows". Mostly used in summer, we plan to take a closer look during our next visit to Bourazani.

Thanks to the good signage, it was easy to get back on the marked path back to the camper stop. More reports will follow, stay fascinated.