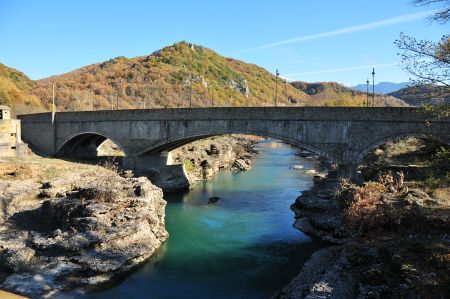 After the somewhat tricky descent from the heights of the Pindos due to the many snow and ice fields now end of November we could already arrive in Bourazani at noon, a serpentine-rich, but beautiful route was behind us.

After a first coffee in the restaurant Bourazani the glorious sunshine lured us back outside and as we had already come over the Aoos river in his wide, naturally preserved bed, the river course should be our first destination. The Aoos rises in the Pindos Mountains east of Ioannina. The spring is located on the mountain Mavrovouni. Its course leads the Aoos consistently northwest. The river has a length of about 272 kilometers, of which the first 80 kilometers lie on Greek territory, then Albania is reached, where the name of the river changes to Vjosa. In addition to Aoos and Vjosa another name was used in ancient times, the Anio. The latter goes back to Anios, a figure of Greek mythology. Anios was the son of Apollo and Rhoeo.

Incidentally, the Aoos and its catchment area is the only Greek area to be drained into the Adriatic. The headwaters in Greece mostly run through wooded, beautiful mountain scenery with wonderful hiking trails, which we will explore. Part of it is protected as the National Park Vikos-Aoos, which extends around the Tymfi Mountains (2497 m). Brown bears still live in Greece's second largest nature reserve, as the park rangers told us during our last visit (bear tracks we found on Lake Ohrid). The Voidomatis, a tributary of the Aoos, forms the impressive Vikos Gorge. The area is called Zagoria and is known as a hiking destination as well as for its beautiful villages, where many traditional stone houses in the epirotic style are still preserved. Not far from Konitsa within the National Park, the Aoos passes through a narrow gorge. At Konitsa, one of the many historic stone arched bridges crosses the Aoos. From here, the river valley is used for agriculture mostly.

After Konitsa the river passes the Greek-Albanian border. At this point, coming from the east the Sarantaporos tributary flows into Aoos, which forms the border for several kilometers. A new border crossing now also allows people to follow the valley further.

The immediate proximity to the border to Albania in times of the local dictatorship probably also made the iron bridge mounted parallel to the stone bridge necessary, fortunately today an obsolete relic, next to the guard bunker (pictured). We could in any case enjoy the beautiful mountain panorama during our walk along the Aoos. First speculations about a canoe trip on the Aoos should bring us back to the region at the latest in the spring.