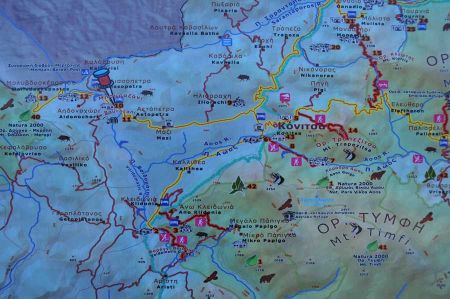 After an adventurous journey crossing the Pindos mountains, we visited the district capital Konitsa together with George from Camper stop Bourazani, which is located only a few kilometers from the Albanian border.

It is only 65 km to the north of Ioannina. The city of Konitsa has about 3,000 inhabitants and is well supplied with shops, banks, a post office, hospital and various hotels, more and more, the region also opens itself for camper tourism, so there have been more camper stops established.

The city of Konitsa nestles almost like an ancient amphitheater at an altitude of 630 m against the flank of Mt. Gymnadis and consists of Kato and Pano Konitsa (the upper and lower part of Konitsa). To the north lies the Sarantaporos Valley, to the east the Aoos valley and the plain of Konitsa, Klidonia is located south of the city.

For the city tour we recommend some sights in Konitsa, but especially the long-distance hiking trails into the Pindos Mountains:

On history and influences on urban development 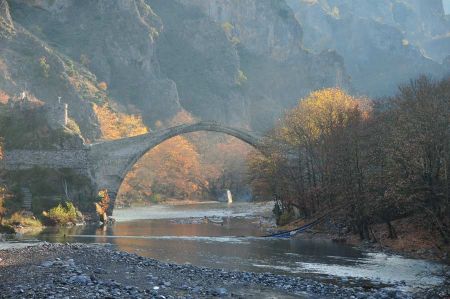 Konitsa was occupied by Turks in 1453 and liberated in 1913. During the occupation, especially during the reign of ruler Ali Pasha, the economy blossomed and Konitsa was an important liaison city between Europe and the Balkans. Thus, there are still some features of the centuries-long Ottoman presence. In the years 1940-1941 Konitsa was attacked by the Italian Army and Albanian marauding gangs. Whole families were killed during the ensuing civil war. Today, there is a permanent photographic exhibition dedicated to this conflict, which has been set up in the restored seminar building at the Konitsa stone bridge.

The monastery Molyvdoskepasti near the border

Northwest of Konitsa almost on the Greek-Albanian border lies the village Molyvdoskepasti. Before you reach the village you will see the monastery of Molyvdoskepasti on the right side. The name Molyvdo-Skepasti is based on the covering of the roof, which was made of lead, but was then used by the Turks to make bullets for their rifles. It is one of the most famous monasteries in Greece. 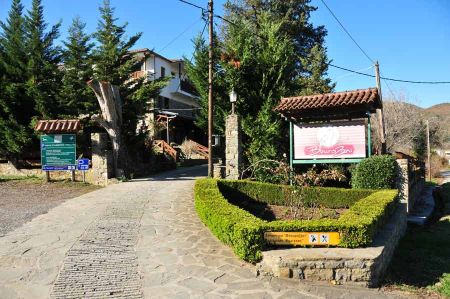 On the way to Molyvdoskepasti you may also visit the Bourazani Wildlife Park with its old watermill. Here visitors interested in wildlife can still see sheep and goats, wild boar, deer and roe deer, but it is not uncommon to encounter bears, too. Bourazani offers round trips through the wildlife park at dusk. Some years ago a bear came from the mountains and killed a deer in the wildlife park.

Other destinations in the Konitsa region

In the village Molivdoskepasti there is a Raki distillery where you can experience how this brandy is made. There is also a lookout point to the border into Albania.
On the way from Konitsa to Elefthero and Paleoseli on the highest point (1,200 m), stands the monument in memory of the resistance fighters of the communist ELAS, who were killed during the German occupation. The ELAS fought on after the Second World War and this resulted in a civil war, which was no less serious for the population than the German occupation before. This is topic in the books "Eleni" by Nicolas Gage and "Death on Corfu" by Ronnith Neumann.

In Kalpaki, about half way from Ioannina to Konitsa, lies a small war museum with objects, documents and uniforms from the years 1940-1941.
In order to really enjoy the natural environment, Konitsa offers a variety of walks or walks all the way to the Pindos mountain range:
- Profitis Ilias about 15 minutes
- Palia Klidonia about 20 minutes
- Molivdodkepasti about 45 minutes
- Trapeza about 20 minutes
- Ag.Varvara about 25 minutes.

We have 737 guests and no members online