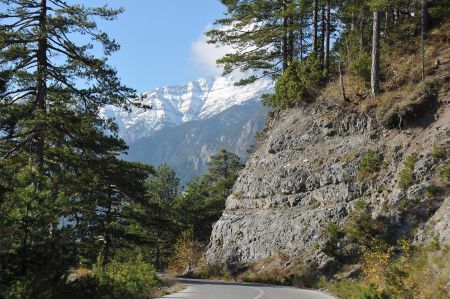 The Massif of Olympus rises to the south of the Macedonian region of Greece on the border with Thessaly and appears due to the proximity to the Thermaic Gulf, particularly impressive viewed from there.

We used the access via Litochoro to get into the National Park. To the local residents of the past, the inaccessible mountains with the often cloud-covered peaks led to the opinion, that Olympus Mountains was considered as quite scary, yes even mystical. In ancient times, according to the Greek mythology, Olympus was considered as the abode of the gods. No wonder, that in ancient times people stayed away from climbing the summit of Mount Olympus.

Hundreds of years later Frenchman LE. Heuzey and the German H. Barth tried to climb to the Mount Olympus, later on the German mountaineer E. Richter was stopped by brigands (brigands are robbers, outlaws or persons referred to terrorize by looting, raping and burning down the civilian population in the wake of armed conflicts) to reach the summit. Just little later, after the liberation of the region from Ottoman ruler ship the Swiss F. Boissonnas and D. Baud-Bovy led by Christos Kakalos from Litochoro succeeded the first ascent of the highest peak "Mytikas". Archaeological investigations at the summit of Aghios Antonios led to findings, which could be classified as offerings for the twelve Olympian gods.

Our first stop on a parking, at about 680 meters above sea level, allows the fantastic view into the valley of the river Enipeas from where the basic shape of a horseshoe can be noticed already in the rock formations. The Mount Olympus massif rises almost immediately and extremely imposing, quasi from sea level to up of about 2,900 meters above sea level, so Olympus is the highest mountain in Greece. In addition to the here described driving direction from Litochoro by Enipeas-Valley, there is far north at Prionia another access from Karya and Olympiada to get into the massif of Dion and Vrontou flank.

The core area of Olympus massif has been placed under protection in 1938, the expanded protected area was extended in the meantime to 24,000 ha. At Mount Olympus massif 1,700 plant species mainly from the Mediterranean flora can be found, including a total of 23 locally endemic species that are found only in the Mount Olympus massif.

The region has 32 species of mammals, among the biggest are chamois, roe deer and wild boar after shooting the last bear in 1980 - from ancient times there are still reports about the occurrence of lion, now extinct for long time already. Among the hundreds of species of birds, many raptors can be watched trying to catch insects and butterflies.

At the foot of the mountain range, at the beaches of the thermal gulf the guests can enjoy hot Mediterranean climate when weather on the slopes is too cloudy and, however quite often a year there is rainfall, which feed the sources of the massif and by this keeps this part of Greece green the summer. With increasing height there is alpine climate, the snow is just melted in May, so the trails are definitely open for Mytikas after snow slumps until June.

In Mount Olympus massif itself one moves on normal hiking routes, experience in hiking are for sure beneficial. The ascent of the summit is to deal with scale for all hikers with experience well to defeat the few meters higher main summit Mytikas, climbing skills are (difficulty II, three-point stance, lifeline for Inexperienced) absolutely necessary. In addition to the normal walking routes, which are pretty good in there also ferrata with high degrees of difficulty. We will even hike some of the trails and make later this article about online.

A parking or access entry fee at Olympus is not charged, however each entering vehicle will be registered. Some hints are given to sites and to the hiking tours. We have driven up to Prionia, the last major mountain station, which, however, was closed.

Campers at Spa Pozar Loutraki Aridea next to Orma