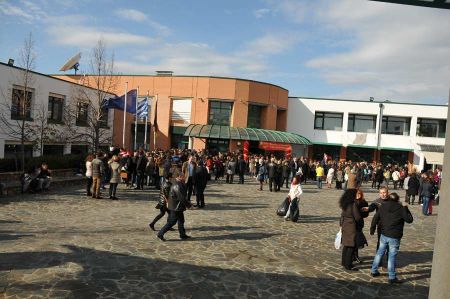 Even you do not even think of the next Christmas because of the blue sky and the moderate outdoor temperatures here in Greece, it approaches with great strides.

Everywhere in the shops the items and expenses indicate it daily, despite outside sunshine. So the German School Thessalonica had used the current weekend to align the annually recurring Christmas Bazaar.

The German School Thessalonica is an international school of cultural relations and education policy, which is supported by the Federal Republic of Germany through mediated teachers and financial resources. The DST is, with its Greek and German division under the current leadership of head teacher Birgit Becker, a private school in the sponsorship of a School Association, in its name the payable tuition fees will be charged. It has an over 120-year tradition as a German school abroad - the lessons began on 13 February 1888. In 1996, a project financed by the Federal Republic of Germany led to a new school building in Pylea, near the highway to the airport Macedonia.

As almost become a tradition for several years, the German School Thessalonica has again prepared a Christmas bazaar this year, contributed by the students, parents and teachers. And as usual, the number of interested guests thatare coming, not only high in numbers but many visitors are also strongly associated with the school, either as a graduate, former teacher or other supporters in exchange of cultural property between Greece and Germany ,

Due to that, it is not surprising, to find couple of offers that is also known by the German Christmas markets, so there were stalls with sausages and meatloaf, along with mulled wine, homemade cakes, coffee and tea. Hopefully the estimated reader might not think now, there was only food and drinks, yes wasis the relation to Christmas? No, there were countless stalls with various Christmas items, numerous stalls had devoted solely to binding advent wreath. Ever so many people were involved in the design of the bazaar that one can speak of a true tradition of the bazaar, which is perfectly organized. In addition to all the stands there was a continuously progressive music program in the assembly hall of the school building which was attended by many listeners.

In general, the DST is one of the best private schools in the region and Greece. Its graduates often reach influential positions in government, business and society after completion of studies and vocational training. One of the most famous graduates is the President of the European Constitutional Court, Vassilios Skouris. Many graduates have also studied in Germany as a result and therefore contribute significantly to strengthening the links between the two countries.

As an integrated school encounter the DST's aim is to lead the students through high quality teaching, through oriented classes to openness, tolerance and performance training as well as through targeted individual and social promotion to an optimal degree. It is the encounter between the two cultures, their life concepts and traditions as well as between people in their societies starting point and basis of all work.
The DST consists of two departments, which are currently attended by a total of about 600 students.

The single-compartment German division includes kindergarten, primary school (grades 1-4) and high school (grades 5-12) with the completion of high school. Even students with orientation Realschule or secondary school find their place here and can make the appropriate statements. The lessons are based on the educational standards of Baden-Wuerttemberg and Thuringia. Another focus is on the teaching of language and culture of the host country Greece. The testimonies of the German department are recognized by every German school.

The Greek division includes high school (grades 7-9) and the Lyceum (grades 10-12). The students have passed through the Greek primary school (Grades 1-6) and passed the entrance examination for the DST. Here, the students are preparing for a Greek curricula according to the Apolytirion and panhellenian inspections, on the other hand they intensively care with the German language and culture. The mathematics and science subjects and arts are taught in German. Almost all Greek students acquire to the Greek school leaving certificate in addition, the Apolytirion, at the end of the twelfth grade with the supplementary examination the German Abitur and thus the "General German Hochschulreife". Deviating from this study Greek final authorization is not specialist but valid for all fields of study and all countries of the European Union and many other countries.

The imposing "Rotunda" of Thessalonica