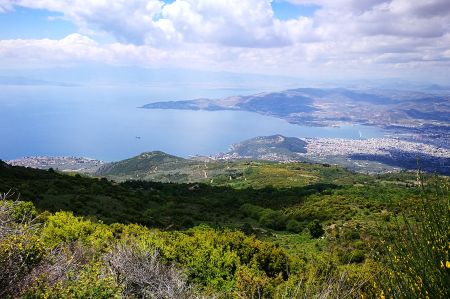 On the Pelion you will find more than 40 mountain villages and small coastal towns, some of them look back to a long lasting history and some can hardly be seen today in dense forests.

In this way, at least, Mrs. Eirini from the Campsite Sikia tried to arouse our interest in a tour around the peak region of Pelion. A little after our departure we had understood her request, because there were beautiful villages along the way, in the midst of the greens, waterfalls in natural mountain landscape and a steep coast, which invariably invited to photo stops.

In mythology the Pelion was designated as the home of the centaurs. Cheiron, whose cave was situated at the chief summit of Pliassidi, raised Achilles here. In the storming of Mount Olympus, the aloids pushed Pelion to Mount Ossa. From the harbor town Iolkos (either Dimini or today's Vólos) Jason and the Argonauts started to search for the Golden Fleece.

In the north east, about 4 km southeast of Véneto, there are a large number of sea caves on a rocky cliff. It is highly probable that the "ovens" - ipnoi, reported by Herodotus: the Persian fleet under Xerxes I is said to have lost many of his ships during a storm (according to Herodotus).

It was, among other things, the geographic conditions, which made the Pelion almost unbearable for the Turkish occupiers. The coastal regions of the Pelion were only very sparsely populated. On the side of the Aegean there is only one natural harbor (Damouchari (d'amour chari = 'thanks to love'), a former Genoese fortress with traces of a castle. Each of the small fishermen's villages had a further mainland town, which was not even to be seen from the sea. These places, although only a few kilometers away from the coast, lie at heights of 200 to 500 m. The paths from the coast to these places were hidden and hardly to be explored for conquerors. Through these circumstances the Pelion has never been occupied by Turks. In addition, the Pilio region enjoyed a special right through an agreement with the Ottomans, giving the piliorites some sort of autonomy similar to the island of Chios.

These circumstances made it possible to develop a national Greek feeling at an early stage, so that the Greek freedom fighter Rigas Velestinlis, also known as Rigas Fereos (1757-1798), moved into the wide world (first station was Venice) Freedom struggle. Rigas Fereos worked as a teacher in Kissós. The fact that there was a Greek school in its time is evidence of the freedom of this region, because teaching in Greek language was strictly forbidden in the Ottoman areas, so there were so-called "kryfa scholia" (secret schools).

During the Greek freedom struggle of 1821 there was also an armed insurrection in Pelion, which was brutally beaten by Turkish troops. A further attempt at liberation failed in 1854. As in 1821, a large part of the Greek upper class refused to support the insurgents. Even talk of the revolutionary actions to the Turks is mentioned. The great landowners, as well as the church leaders, feared the loss their privileges, which they enjoyed under the Ottoman rule. In 1878, several armed conflicts were again held at Makrinitza and the monastery of Sourvia. The liberation was not forced on the battlefield. In the wake of the Berlin Congress of 1878, Greece and the Ottoman Empire agreed to unite Thessaly with the already liberated Greece in 1881.

Our tour ended in Volos, so we decided to take a short tour of the city. A further tour through the green mountain world of the Pelion will follow later on. Stay interested.

Day trip to Volos to explore the Pelion Railway