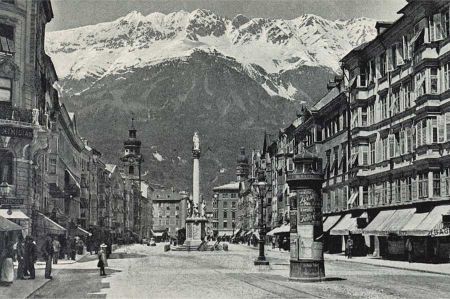 As a part of our project development "A journey of Intimacy and Culture along the Roman Roads" to create a concept for modern Camper routes to the south our route direction inevitably leads over the Alps.

In Roman times there was Augsburg as starting point of two routes that have been used and expanded to cross the Alps into Italy. The older of the two routes was built under Nero Claudius Drusus, why it is named with Via Claudia Augusta. Opened in 15 BC, it led from Veneto via Verona, Bolzano (Pons Drusi), Meran (Statio Maiensis) through the Vinschgau, passing the Reschenpass, Finstermünz and Fernpass via Füssen (Foetes) to Augsburg (then Augusta Vindelcorum).

Both routes were far previously known as trade routes and have been used quite a lot, however, the Romans shaped and plastered them as at least partially fixed routes. To secure the routes and stops it was absolutely necessary that often precursors for later settlements or Roman camp or even castles were established.

Against this background and in the wake of border security in the north and the conquests of Räter and Noric the Romans established a settlement under Emperor Augustus to protect the later Roman Road Via Raetia in 15 BC. The military equipped settlement Veldidena (Wilten) existed until late antiquity and was destroyed about 600 AD. Settlements on the Wiltener / Innsbruck urban area can be traced back to the Neolithic period. Pre-Roman places and urn fields in Wilten, Amras, Hötting and Mühlau and finds from the Latènezeit on Adolf-Pichler-Platz in downtown show that the Innsbruck Basin was inhabited continuously for more then 3,000 years.

So Veldidena was originally a Roman civilian settlement and a moderately fortified supply depot of the border troops, but also an important stage stop on the Roman trade route via the Brenner. Its remains lie in the field of today's provincial capital of Innsbruck in the center of the district Wilten, Tyrol. Its outstanding location at the confluence of the rocker in the Inn made it the most important Roman Age settlement in North Tyrol. In research circles the place is mainly known for its diverse and rich settlement remains and grave findings.

The excavation area today is about 40 hectares, with a majority of the area is overbuilt. The southernmost point of findings is the burial ground on the Lorenziacker with late antique inhumations and high imperial cremations on the southwest corner. From Vicus partially explored house number 3 in the north, some remains of buildings at the intersection Fritz concert-road / Anton-Melzer-Straße and coin finds are known to Kaiserschützen place. At the intersection Anton-Melzer-Straße / Leopoldstrasse / Graßmayrstraße a bath house was discovered. On the eastern point Neurauthgasse / Graßmayrstraße, were three large warehouses, two of them were incorporated in a castle in the 4th century.

Wilten is located on Bergisel, at the northern exit of the Innsbruck basin, on a wide, slightly against the Inn valley sloping terrace of sands of the Sill river. There the Roman road Reached the Inn valley via the Brenner Pass. The Bergisel covered the terrace plateau to the south. From there you had a good overview of the Innsbruck Basin in the north and west. Because of these advantages the place was inhabited in pre-Roman times.

In Veldidena, the Roman Road passing Inn river valley met with the road from Reschenpass and the Brenner road. The Inn valley road proceeded at Wilten through the narrow pass of today Sonnenburgerhof to the junction of the Brenner road to the Bergisel ski jump and continue through the Haymongasse northwest of the basilica. They had the standard of a via publica, 5.5 m, had a 30-40 cm thick base and a tamped paving of river stones. The distances between the larger settlements were indicated on milestones. One of them is still to be seen in the Wiesengasse in Amras at its original place, another one, from the time of Septimius Severus, was discovered in the 18th century at the Sonnberg.

The then built fort served as a supply depot for the border troops and a stopping point on the way to the Danube limes and Raetic provincial metropolis Augusta Vindelicorum. This assumption is confirmed by mentioning the ten-kilometer away Teriolis in the Notitia Dignitatum where the supply routes were explicitly securing as an object of the fort crew. You may also receive the information collected from the surrounding estates, the annona militaris were stored there. Veldidena is also regarded as the capital of the Inntal Breonen.

From the 3rd century, the importance of the place grew even more, because now also a direct road link to Brigantium (Bregenz) was established, which included via Decia. After the fall of the Western Roman Empire, the area was initially under bavarian sovereignty before it rose with the annexation of the Duchy Bavarian to the Frankish empire of Charlemagne from 788. In the following centuries the area around Innsbruck again became a part of the newly created Duchy of Bavaria and was in later episode under the rule of the Counts of Andechs.