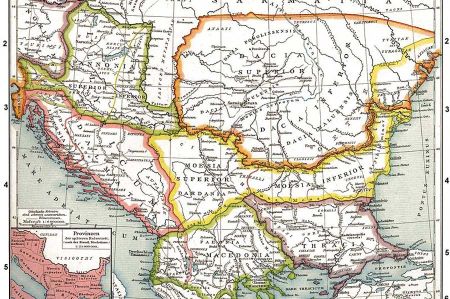 In some of our themes along the Roman road system, the ancient, partly Greek or Roman names of settlements appear from tribes or settlements that have long disappeared already since then.

Just to make the approximate assignment to the respective region, we want to refer to these tribes again. Thus, the term Illyrien originating from the Greek for a region in the west of the Balkan peninsula, where the tribes of the Illyrians had settled. The later, ancient world power Rome, took over the areas of the tribes of the Illyrians and their names too in a somewhat adapted, Latin form as Illyrium.

From the records of the historian Herodotus it appears that the area of ​​the Illyrians is said to have already extended from the Adriatic coast to Morava in the east and the Adige in the west in the fifth century BC. He even continued writing, there had already been close trade relations between the Illyrian tribes and the Greeks, which later even turned against the up-coming Macedonia of Alexander the Great. According to ancient scriptures, Demosthenes is said to have sought partnerships among the Illyrians as early as 342 BC, which were clearly directed against Macedonia. In the second half of the 3rd century, the Illyrian tribe of the Labeaten became a sort of leader of the Illyrian Empire. It was ruled by Pleuratos († 250), Agron († 231) and Teuta (231-228). Their settlement area was on the eastern Adriatic coast and extended from about the present day Montenegro in the north to the area of ​​Lissos in the north of present-day Albania, with the king Teuta a mighty empire with its seat in Scodra, today's Shkodra existed.

At the height of their power, the kings of the Labeaten also ruled far parts of Dalmatia in the north and in the south the area as far as the river Vjosa. In the year 228 BC, this empire was conquered by the Romans. The territory of Shkodra, formerly the royal residence of kings, was organized as a vassal state of the Romans. It was there that Pinnes, the son of Teuta, followed by Skerdilaida (212-206), Pleuratos II (206-180) and finally Genthios (180-168). Then the city came under the direct rule of the Romans.

After further long battles, the empire of the Illyrians fell completely under the rule of the Roman Empire and from then on was called Illyricum in Latin. Under Sulla it was united with Macedonia, just with Gaius Iulius Caesar it became an independent province. A great uprising of the Illyrians between the years 6 and 9 AD could be kept by the Romans with huge difficulties.

When the Romans conquered the territory of the Pannonian tribes later, they called it Illyricum inferius, later Dalmatia, however, it was named Illyricum superius. In late antiquity, after the imperial reform of Diocletian, Illyricum was divided into seven provinces: two parts as Noricum, two as Pannonia, Valeria, Savia, Dalmatia and Dacia (the Dioecesis Illyrici occidentale). Later Illyricum was administered by a Praefectus, it included the provinces Moesia superior, both Dacia, Dardania, Macedonia, Thessalia, Achaea, both Epirus, Praevalitana and Crete.

Between the 3rd and 6th century Illyricum provided not only many recruits for the army, but also a number of Roman emperors, including Diocletian and Justinian I. After the division of 395 many Illyrian territories counted to the Eastern Roman Empire, when repeatedly border disputes appeared with Western Rome. Latin remained as the common language, and large parts of the region were under Canon law of the Bishop of Rome. The northern Illyricum was settled by East Gothic tribes at the beginning of the 6th century, since about 580 Slavs settled in the entire region, who gradually supplanted the Illyrians.

We have 472 guests and no members online