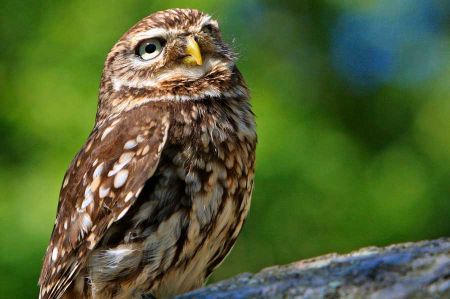 In many countries of our world the owl is considered as a bird of wisdom and it was same in ancient Athens already, where the little owl was considered a symbol of wisdom too.

This is the background, that owls were often depicted on the coins that were shaped for the city of his time together with head of Athena. Well-known phrase "Carry owls to Athens" goes back to the comedy poet Aristophanes, who claimed the inhabitants of Athens are so rich in his comedy "The Birds",, because lot of "owls", meaning coins, are always next to them in their purses. In 315 BC, Aristophanes is said to have commented on a flying owl in the following words: "Who brought the owl to Athens?"

Aristophanes is considered one of the most important representatives of the Greek comedy, especially of the Old Comedy, and the Greek theater in general. His comedies, especially Lysistrata, were played again and again. Little is known about the poet's life. He was estimated to be born in 450 or 444 BC as son of Philippos from Kydathen, in the district Phyle / Athens. From 430 to 428 BC, he probably received training as a playwright. His first three pieces, he performed as an anonymous author of Kallistratos. His sons Araros and Philippos were also comedy writers. Araros performed the last two pieces Kokalo and Aiolosikon for his father.
The saying "Carry owls to Athens" thus stands for a superfluous or unnecessary activity. Therefore, it would be superfluous to bring more money into the city.

Owls were then also considered a symbol of the goddess Athena, the patron goddess of the city of Athens. The owl symbolized the wisdom, especially because it can also see in the dark. As most Athenian figures show, it is the Little Owl (Athene noctua) that is pictured. Wolfgang Hildesheimer has developed the ironic tale "I carry an owl to Athens", which is actually about a little owl.

Roman continued with poems of Aristophanes

It is quite possible to interpret the sentence as an indication of the nonsensical activity, to try to bring wisdom to the city. More likely, however, that he referred to the coins of Athens, on which the animal resplendent. Aristophanes described it as superfluous to send silver coins (with the owl) to rich Athens. In verse 1106, for example, he writes: "Owls will never lack."

Roman historiography took the saying as ululas Athenas. By the time, many more proverbs have formed on the basis of this phrase. In ancient Greece, for example, the words "bringing fish to the Hellespont" or "bringing crocodiles to Egypt" were already known. More modern variants are "bringing beer to Munich", "carrying coals to Newcastle (alternatively Birmingham)", "giving coffins to the baker's children" or "driving to Tula with their own samovar" (English: bring / take / carry coals to Newcastle). (Russian saying, in the city of Tula, were the tea kettles called Samovars are made). Similarly, the Latin ligna in silvam (ferre) is "carrying wood into the forest".

In Germany, too, there are many well-known variations of this ancient saying, such as "peat mooring" in northern Germany, "pouring water into the Pegnitz" in Franconia, "worming to Metz" or "Carrying water to the Rhine ".