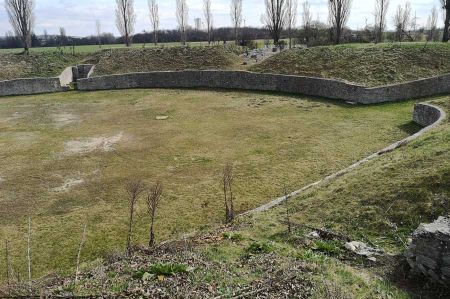 Next to the Roman military camp of Carnuntum, which was located directly on the banks of the Danube on the Pannonian Limes, the civilian city of Carnuntum developed in quick steps in addition to the military camp until it became the administrative centre of the Roman province of Pannonia at the beginning of the 2nd century AD.

We used our stay in Vienna for a day trip to the Roman city and its still preserved ruins. Apart from the imposing history, there is the possibility of extensive walks in the wider area of ​​the Danube not at least due to the distance of the individual Roman objects.

The importance of Carnuntum for archaeology 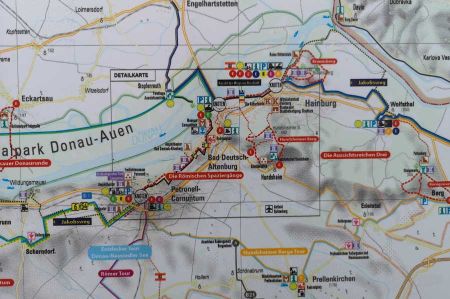 Today Carnuntum is one of the most important and most extensively researched ancient archaeological sites in Austria, most of its sites are located in the municipal areas of Petronell-Carnuntum and Bad Deutsch-Altenburg, both in the state of Lower Austria. In addition to the Carnuntinum Museum, the parklike garden in Petronell when passing the residential area of ​​the civil city, with a 1: 300 scale city model next to the new visitor centre, the late antique Heidentor and the two amphitheatre can be visited. The foundation walls of the large thermal baths of the civil city have been preserved and are accessible to visitors. The legion camp, which was largely excavated in the 20th century, was filled up again; its walls can only be seen as a terrain survey. Petronell is also home to the privately run museum of the Carnuntum Auxiliary Castle, in the basement of which an intersection of the long-distance water pipe and the castle's sewer is preserved and open for public.

The amphitheatre of the civil city of Carnuntum 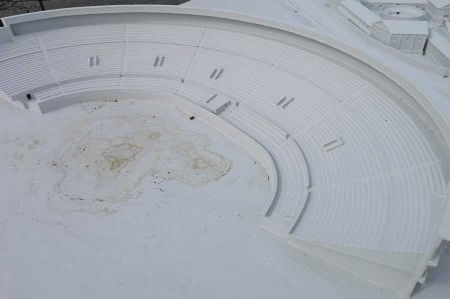 Like almost every larger Roman city, Carnuntum also had a gathering and amusement location in form of an amphitheatre, which should be the first goal of our tour. The first archaeological studies in the city had searched in vain for the amphitheatre, it was so far from the city. It could only be localized at the beginning of the 20th century, since it had been used as a game conservation, as a so-called Grüblremise.

The amphitheatre, which holds around 13,000 people, was built next to the civilian city in Carnuntum's heyday, as it was assumed that the city would grow further. The longitudinal axis of the entire complex measures 118 meters, and the stands were four meters high above the level of the arena, in order to protect the spectators from the wild animals in the arena, since it was used for gladiatorial fights and the pursuit of animals. 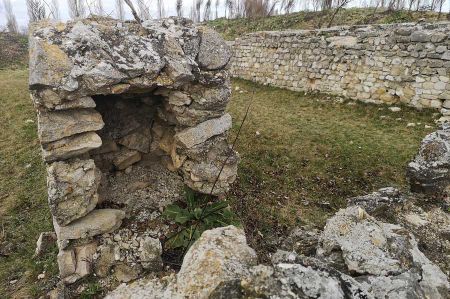 The arena of the amphitheatre was surrounded by grandstands 25 meters wide on both sides of the gates. Stairs and stair towers led to the higher ranks. A hexagonal basin from the 4th century AD made from reused building blocks outside the southern passage could be interpreted as a font, but this is not certain. At this point the amphitheatre no longer served its actual purpose.

Just by the help of an inscription square found there the building could be identified as the long-sought amphitheatre of the civil city. Since there was another layer of rubble above the layer of humus that had accumulated since Roman times, it was assumed that it was badly damaged by stone robbery in the 18th century for the construction of the Traunschen dumping box and the wall of the zoo.

The amphitheatre was almost entirely built in stone in the first half of the 2nd century and was located south of the civil city, just about 300 meters from the city wall, in a densely built-up suburb. It was probably rebuilt or repaired again in the 3rd century, as the use of spolia in the east wall suggests.

Structure and conception of the Carnuntum amphitheatre 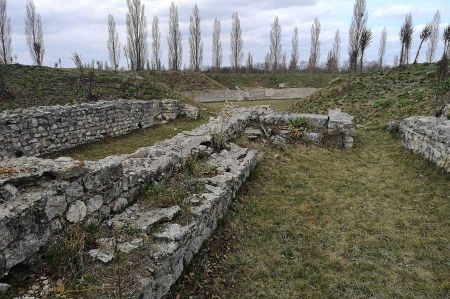 The approximately 127.5 x 111 metre building had the shape of an irregular ellipse oriented from north to south. Either the architect had tried to adapt the theatre largely to the natural hollow or construction looking like they had started on both ends at the same time. It could be entered from the north and south through two long corridors, which were divided into three cross passages by two rows of pillars and connected to the seven-metre wide gates. The north gate, gently sloping down to the Danube, was 22 meters long. There was a massive stone threshold, on which the two wooden gate wings were probably fixed once. 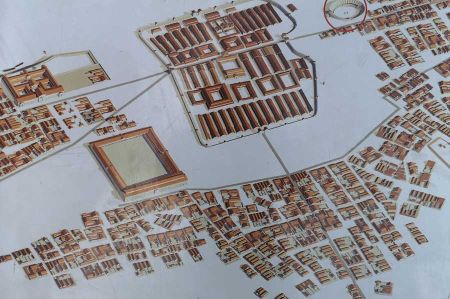 To the east of the north gate was the entrance to a mortuary (spoliarium), in which injured and dead people were deposited during the games. The south gate was constructed similarly. There was a funnel-shaped courtyard in front of both gates, and a two-room, rectangular building was attached to the north gate, perhaps the Nemeseum of the amphitheatre. The latter could also have been in a room with wall paintings behind the western kennel. The floor of the arena (caeva) consisted of a pounded layer of gravel on a clay surface and sank a little towards the middle (slope 40 cm). There was a stone-enclosed, two and a half metre deep water basin. In the west and east of the arena wall one came across two further entrances that led to the animal kennels (carceres). The western kennel had two rooms. There was a small window on the back wall, from which you could drive the animals into the arena with skewers and torches. In the south of the arena one came across a two-meter-long stone block, on the top of which an iron ring was attached. Animals or prisoners were probably chained there during the games.

The grandstands (up to twelve rows) rising in steps surrounded the 68 × 52 metre arena and probably reached a height of 18 meters. The seats were made of wood. The 4-metre high arena wall was initially painted yellow, later painted red. It was connected to the outer wall by means of spoke walls arranged in the form of spokes, which supported the substructures, the vault rising to the outside and the 25-metre deep bleachers. It was partially clad in marble, on its underside probably structured with buttresses and arched arcades and accompanied by a surrounding paved path leading to the spectator entrances. Some are still visible on the west side. Two more ring walls stood behind the arena wall, two and six meters apart. On the east side there were three representative boxes for guests of honour such as the city council, the officer corps and the governor. Stone plaques were placed above the spectator stands. Two of them, one for the citizens of the rural district of Aelenus (loca Aeleni pagi) and one for the priesthood of the Augustals (loca Augustalium) were found during the excavations.