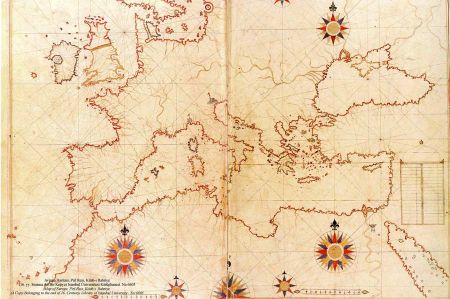 Piri Reis, who was born around 1470 in Karaman / Konya in Turkey, was an admiral of the Ottoman fleet and at the same time a down-to-the-minute, renowned cartographer and author.

He wrote an important book on seafaring in the Mediterranean, collected maps and even created nautical charts. On the 500th anniversary of the creation of the first hand-drawn world map, Piris Reis has now been honored by UNESCO in Ankara. He used the knowledge of the sailors in connection with his knowledge of mathematics and geometry and was able to draw the oldest known map in the world in 1513.

"Piri Reis was a humanist who helped people of different religions and cultures to escape from the Spanish coast (Inquisation) with ships," said Ocal Oguz, chairman of the Turkish UNESCO Commission during a ceremony attended by numerous experts, researchers and speakers who participated. Whether Piri Reis, who originates from piracy, should actually be called a humanist, remains historically questionable.

In any case, Piri Reis's mother was the sister of the then infamous pirate Kemal Reis, who was a semi-official for the Ottoman Empire on forays. In 1481 Piri Reis followed his uncle and took part in the war against the Republic of Venice a little later. In 1495, pirate Kemal Reis officially joined the Ottoman fleet to fight in the 3rd Venetian War of the Turks. So he received the Turkish title "rice". In 1501 Kemal Reis captured 7 Spanish ships at the Battle of Valencia and on them a nautical map of the "western region" allegedly drawn by Columbus. In general, greater successes of the Ottoman fleet remained, because the pirate tactics had no success against the disciplined fleets of Venice and Spain. However, Kemal Reis was not to be prevented in the civil service, now and then as an independent pirate to attack Western European merchant ships, what the "Porte" problems in peacetime f. e.  brought in with the Knights of Rhodes.

In Gelibolu Piri Reis started working on his seafaring book 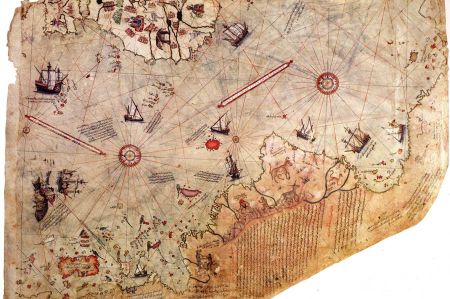 In 1511, his uncle died in a shipwreck near Naxos. As a result, Piri Reis moved to Gelibolu and began to write his seafaring book on the Mediterranean "Kitab -i Bahriye". He started with the creation of his nautical chart at this time, for which he also used foreign maps, the history even says that one had been a map of Alexander the Great. The conversations with many sailors on the way had led to information that nobody had gathered before him. His language skills in Greek, Italian, Portuguese and Spanish were a great help as he was able to talk directly to the sailors.

From the year 1516 Piri Reis was captain of the Ottoman fleet in the Mediterranean and in the waters around the Arabian Peninsula. In 1517 he was the first to explain Sultan Selim I. his first world map. 1516/17 he participated in the campaign against Egypt and then completed his Kitab -i Bahriye in 1521. In 1522 he participated in the successful siege of the island of Rhodes. In later years he was a Turkish governor in Egypt, wrote poetry and wrote more on his sailing instructions in lyrical form.

Piri Reis Commander in Chief of the Ottoman fleet

In 1524 he was the captain of the ship, which brought the Grand Vizier Ibrahim Pasha to Egypt. After he had revised the Kitab -i Bahriye on the advice of the Grand Vizier, he could submit his material to the Sultan Suleiman I in 1525. In 1528 he gave the sultan his second world map.

1547 Piri Reis was appointed Commander in Chief of the Ottoman fleet in the Indian Ocean (Hind Kapudan -i Derya) and Admiral of the fleet in Egypt (Misir Kapudan - i Derya) with base in Sues. On February 26, 1548, he succeeded in recapturing the city of Aden occupied by the Portuguese. In 1552 he took the since 1507 by Portugal occupied important base Muscat. Shortly after, he conquered the island of Kish. In 1552/53, he besieged the island of Hormuz with 31 ships and more than 800 soldiers. The island's inhabitants offered him great treasures, which he accepted and saved the siege of the island. On his way back to Suez, he was informed that a powerful Portuguese fleet was blocking entry into the Persian Gulf. Piri Reis then had the captured treasures reloaded on three ships and left the bulk of his fleet (28 ships) in safe Al-Basra.

With the three ships he tried the breakthrough by the Portuguese blockade, which succeeded in losing a ship. However, on his arrival in Egypt, his political adversary to the post of governor told to the Sultan there that Piri Reis had arrived with only two ships of his fleet (originally 31 ships). He also mentioned neither the salvation of the fleet in Al-Basra, nor the treasures on the two ships. Sultan Suleiman furiously ordered the death sentence for Piri Reis, who was publicly beheaded in 1554 at the age of 84.

With him one of the outstanding cartographers of his time died, who, however, had never seen most of the countries he had drawn. His sailing instructions for the Mediterranean as well as for the other seas he described were groundbreaking.