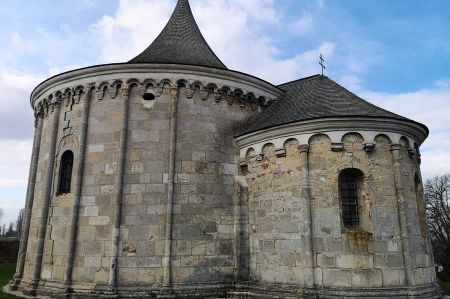 Our tour from the Roman amphitheatre to the so-called pagan gate through the ancient Roman city of Carnuntum was (almost) finished, so we wanted to explore the surrounding area as well.

A relatively well signposted path leads from the “Heidentor” to the small town of Petronell-Carnuntum. A little later we noticed that there should be another amphitheatre in the former Roman military camp. We followed the signs. We felt like the sidewalks raised when night fell, because there was no one on the street. The typical development of a street village awaited us, houses in almost only one row along the thoroughfare. When after a few kilometres there were no signs of the military camp, we turned back, somewhat disappointed. How to admit.

A round chapel of Roman origin in the town centre However, our annoyance about missing signs quickly vanished when we suddenly came across an imposing stone chapel on a green meadow directly next to the street, which had some signs of breaking, but was otherwise in fairly good condition. Our interest was kindled again. The circular chapel, also named as the Johannes chapel by the population, is a church building from the Romanesque period, which made the building known far beyond the borders of Petronell-Carnuntum due to its age. Today the Romanesque chapel is one of the oldest and most valuable circular buildings in Austria from that period.

The circular chapel was built on a circular floor plan in the first half of the 12th century. The builders and planners used the foundations of a previous building that was probably built in the second half of the 11th century. It was possibly the first parish church in Petronell-Carnuntum. 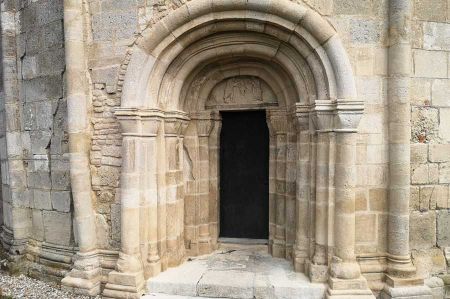 To this day, the researchers have not yet agreed on the exact meaning and function of the Romanesque building and its addition from the 12th century. The question of whether the chapel was built around 1200 as a uniform new building or whether it was built in two phases (around 1130 and around 1230) is still unclear. The assumption is obvious that it is a Templar building. The chapel used to be used as a baptistery. This is indicated by the original lack of a crypt. Today's crypt was created in the course of the 18th century. Today it serves as the resting place for the mortal remains of the “von Abensperg-Traun” family.

The chapel was badly damaged in the wars against the Ottomans and against the French, and the condition of the building deteriorated dramatically. The cracks in the masonry also assumed threatening dimensions despite several renovations. In the 1950s the building could be restored and thus saved from decay. 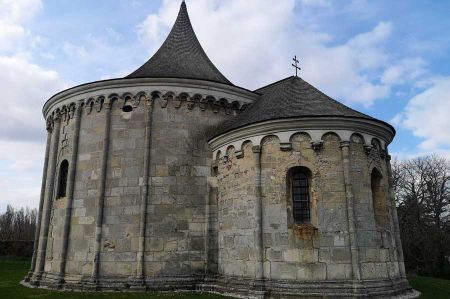 The chapel consists of a higher circular building with a curved conical roof and a lower apse with a semi-circular end. It is built in Romanesque stone blocks made of finely worked stones. A passage is hidden in the meter-thick outer walls, which was used to defend against the raids that were frequent at the time. The outer facade is divided by delicate half-column pilasters with capitals.

The base of the pilasters is in a continuous, profiled base and ends in the arched frieze under the eaves. The chapel is accessed via a Romanesque step gate with four half-columns with cube capitals. In the 16th century, a hexagonal gallery was opened inside, according to the description of the building. In the 17th century, a dummy dome was built in place of the original rib vault, which had been demolished in 1696. The cone roof dates from around 1700. The sculptures of St. Joachim and St. Anna were created around 1700.

We would also have liked to have a look at the interior, unfortunately the entrance was closed.