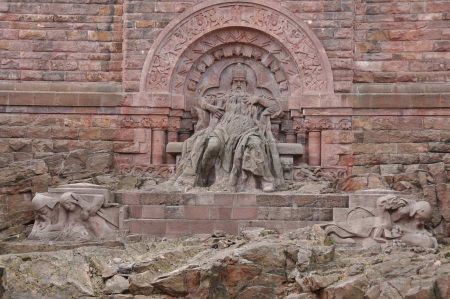 Visiting the Kyffhäuser monument and the ruins of the Reichsburg Kyffhausen in the Thuringian Kyffhäuser district south-east of the Harz brought us to the tragic story of Emperor Friedrich I, known as Barbarossa.

Emperor Barbarossa, who was born around 1122 and died in an accident on June 10, 1190 in the river Saleph (today called Göksu), drowned near Seleucia in Lesser Armenia during the Third Crusade. From 1152 to 1190, Barbarossa was Emperor of the Holy Roman Empire. He came from the Staufer noble family and was first as Friedrich III Duke of Swabia (1147 – 1152), then from 1152 – 1190 also Roman-German king.

Old engravings often show Barbarossa bathing and therefore undressed, giving the impression that Barbarossa drowned while bathing. Other depictions show Barbarossa in full armor crossing the river and falling from his horse, and it is said that he drowned in this way. 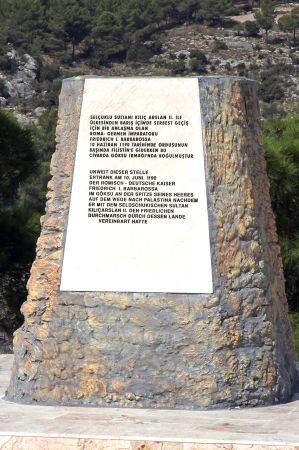 In the imagination of the people, who were decisively shaped by the superiors in the church with the popes at the top, one could receive the forgiveness of all sins at that time if one participated in a crusade, because the holy places were considered to free the Christians from the unbelievers. Of course, people were not told that it was usually only about expanding their own sphere of influence or gaining new territory. On March 27, 1188, Barbarossa had the crusade conjured up at a court day in Mainz. On May 11, 1189, the Crusaders began to move from Regensburg. The army, which marched through Bavaria and Vienna into the Kingdom of Hungary before reaching Byzantine territory, was about 15,000 strong.

Emperor Isaac II of Byzantium saw the crusader army as a threat to his empire, so the inhabitants of Adrianople also fled, after which the city was then plundered and then large parts of Thrace. To appease Barbarossa, Emperor Isaac II first offered Barbarossa the title of Emperor of Ancient Rome. In the further negotiations, however, Barbarossa was able to blackmail 70 barges and 150 ships for the army's crossing to Asia Minor.

Already after crossing the Hellespont on Byzantine ships in March 1190 and reaching Philadelphia, there were first armed conflicts with the Turkmens, whose leader Kılıç Arslan II, the Sultan of Iconium (modern Konya), had promised the peaceful passage of Barbarossa's troops , whose sons, however, did not keep these promises. According to various chroniclers, the entire crusader army should have already consisted of 100,000 men, including around 20,000 knights. Again and again there were attacks by Seljuk horsemen and archers, who had an easy time in the mountain regions of Asia Minor due to the long, stretched train. Increasing water scarcity and bottlenecks in supply also caused serious human and animal losses. Despite the assurances of the leaders provided by Kilic Arslan II that the raids would be carried out by bandits, the army of Barbarossa then met a strong army in the plain of Philomelion, so it was now finally clear that Barbarossa had been duped was.

In the battle that followed, the crusaders were able to defeat the Seljuks for the first time. So Barbarossa continued towards Iconium, but the raids on his army did not stop there. On March 17, 1190, Barbarossa reached Iconium, or the Gardens of the Sultan, where he pitched his camp, severely weakened by the constant raids, which had cost heavy losses, especially in mounts, or were slaughtered from hunger.

Barbarossa divided his army the very next day and sent some of the troops led by his son Duke Friedrich V of Swabia to attack the city of Iconium. Negotiations had already begun the day before, but were unsuccessful. The chief negotiator, Gottfried von Wiesenbach, whom Duke Friedrich met as he advanced, reported that the sultan had taken refuge in the city's citadel with his army. Almost all of the residents, along with their treasures and supplies, are now in the citadel. At the first attempt, Duke Friedrich was able to storm a city gate and break the Seljuk resistance. Almost all of the remaining Islamic residents were killed.

In the meantime, the Sultan's troops had surrounded Barbarossa and the rest of his troops, making the situation seem hopeless. Especially since Barbarossa knew nothing about his son's victory. Allegedly, it was Barbarossa's courage alone that referred to the will of Jesus Christ and ordered his troops to sally out, so that in the end a union with the duke's troops was possible. About 60,000 people died that day alone.

Sultan Kılıç Arslan II probably capitulated the following day. The sultan now had to provide hostages to prevent further attacks on Barbarossa's army. Furthermore, the sultan had to constantly provide sufficient horses, beasts of burden and food. The crusaders had already captured large quantities of grain, gold, silver and purple cloth when Iconium was partially sacked. The sultan himself had not broken his word. His eldest son Outd-ad-Din had allied with Saladin's son against the Crusaders to stop the passage to the Holy Land. Saladin himself had already set his troops in motion in the direction of Barbarossa, which meant that the crusaders' siege at Acre had to be broken off. In any case, Saladin wanted to prevent the unification of the western crusaders.

Hostages for the onward crusade 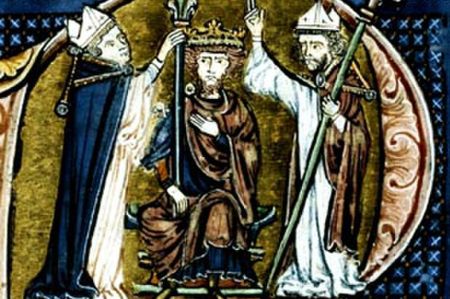 Already on May 23, Sultan Kılıç Arslan II organized a large market at the gates of Iconium, where the crusaders could buy around 6,000 horses and mules, bread, meat and cheese. By May 26, the crusaders had marched on again, and only repeated threats to kill all the hostages were able to prevent the attacks during the march through the Sultanate of Iconium. On May 30, the crusaders had reached Laranda, which already belonged to the territory of the Armenian prince Leo, who was allied with Barbarossa.

With much effort the crusaders had overcome the Taurus, now their leader Barbarossa died in the river Saleph. A large part of the army retreated by sea, completely demoralized. Only about 2000 knights continued their journey to the Holy Land under the leadership of their son, Duke Friedrich.

Supposedly Barbarossa was buried in Tarsos. Other sources claim that the burial took place in Antioch, still others claim that his bones were buried in the cathedral of Tyre. To this day it is unclear which sources are correct. This makes Barbarossa the only ruler of the Middle Ages without a verifiable burial place.

Visiting the Staufer-Spectacle in Waiblingen - Impressions

Baldwin I - First Crusade and King of Jerusalem