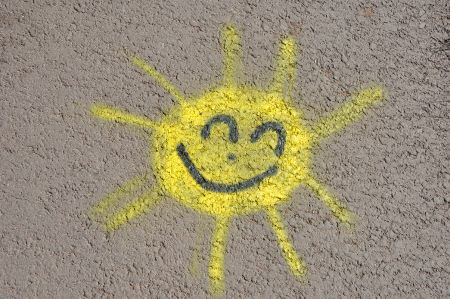 The sun is the central star in our heaven, all life on the earth depends on it. This great importance has been conscious to the people since ages. Thus many earlier cultures revered the sun as a god.

The regular daily and annual reappearance of the sun was partly expected to be anxious and conjured up by means of cult or magical rituals. Solar eclipses caused great consternation and fear. In ancient China it was believed that a dragon would devour the sun. Through great noise people tried to persuade the beast to release the sun.

On the other hand, mankind was able to make use of the knowledge of the fundamental periods of day and year for all life. The sun is, through the rotation of the earth, the natural clock for the people and the sequence of the seasons led to the development of the calendar, which was vital for all cultures, especially after the development of agriculture.

For the Sumerians the sun embodied the sun god Utu. The Babylonians corresponded to the god Shamash, who entered heaven every day, and whose rays were not hidden. In ancient Egypt, Ra (also Re or Re-Atum) was worshiped as a sun god. For a short time, the "heretics" Pharaoh Akhenaten left only Aton, the personified sun-disc, as the only God, and abolished the worship of all other Egyptian gods. In China, the sun stood as a symbol of East, spring, masculinity (yang) and birth, as well as an emperor.

In Ancient Greece, the sun god Helios was worshiped, who drove the company with his sun cart every day. However, from ancient Greece, the first considerations are also given, in which the sun is regarded as a physical object. Probably the oldest of these hypotheses originates from Xenophanes, who called the sun a fiery exhalation or cloud. This represented a great cultural-historical change because the perception of the sun as a natural object lay on a different plane from the previous conception of the sun as part of a divine entity, which was also represented in the later centuries. It was from this same idea that the first critical examination of the humanized god-image of ancient Greece ("If the horses had gods, they would look like horses,") and the first thoughts on monotheism. With Xenophanes the sun first appeared in European history as an object of physics; One could conceive this as the birth-hour of astrophysics. The theses of Xenophanes were later adopted by other Greek philosophers. For example, the prescrat Anaxagoras described the sun as a glowing stone. These conceptions were not followed by all thinkers in the following, and many later schools fell back on rather mythical explanations.

The Greek god Sol invictus was largely equivalent to the Greek god Helios, whose cult was widespread in the time of the empire until the beginning of Late Antiquity. From the ancient world, the sun is a symbol of vitality in astrology.

The observation of the sun and other stars and the determination of their orbital points (equinox, summer and winter solstices) was a prerequisite for the preparation of calendars. As a result, important events of the season could be predicted, such as the arrival of the Nile High Water in ancient Egypt, the most favorable time of the sowing, or the arrival of the dangerous storms of the sea. Pre-Christian cult sites, such as Stonehenge, had obviously been built for such purposes. The site of Stonehenge is arranged in such a way that on the morning of the midsummer day, when the sun reaches its highest northern position, the sun rises directly above a position stone ("heel stone") and the sun rays penetrate straight into the interior of the building. The bronze-age Nebra plate also appears to have been an instrument for observing the heaven. Their golden borders are interpreted as "sunbaths", a religious symbol of the Bronze Age. At the same time, the sun carriages of Trundholm, with the disk as a sun symbol with a day and night side is interpreted.

The geocentric worldscape of antiquity, as handed down by Ptolemy, saw the earth as the center of the universe. The sun, the moon, and the planets moved round the earth on circular paths. This performance lasted nearly 2000 years. However, it had weaknesses. Thus the motion of the planets observable with one's eyes could only be explained by complicated auxiliary constructions of the epicyclic theory. Already Aristarchus of Samos postulated in the second century BC that the sun represents the center of the world. The scholars Nicholas of Cusa and Regiomontanus resumed this idea more than 1500 years later. In his work De revolutionibus orbium coelestium, Nicholas Copernicus attempted to create a mathematical basis for what he failed. His work, however, stimulated further research, including by Galileo Galilei. As a result, the heliocentric image of the world, which regards the sun as the center of the universe, gradually developed.

Further advances in astronomy have shown that the sun does not occupy an outstanding position in the universe. Rather, it is one of several hundred billion stars of the Milky Way, which in turn is part of even larger structures of the cosmos.

Delphi - Mythology about the Oracle of Delphi

Moon God Man - Temple in Ur excavated by Wooley