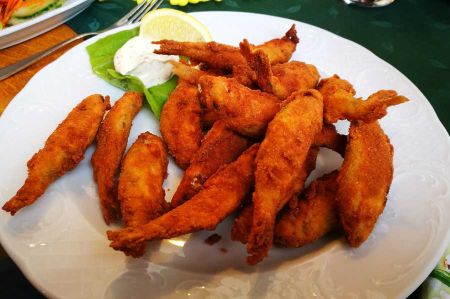 Traditionally, Meefischli should not be larger than the little finger of the statue of St. Kilian on the Würzburg Main Bridge, so at least local vernacular (which corresponds about 8 to 12 centimeters) says.

And after a generous invitation from Brita, our lunch in a classic Franconian tavern should show a fish-size fitting. But what are Meefischli, the esteemed reader will ask. Quite simply: small fish from the Main river, usually the genera arbors and roaches.

Caught from the Main, cleaning and fried, Meefischli are a franconian specialty. The fish are freshly prepared and eaten without side dishes throughout the piece. The small, silvery shining ukeleies (arbors) are also called "sardines of the Main", which is quite a parallel to the Greek anchovies and the Turkish Hamsi.

Meefischli - preparation of arbors and roaches 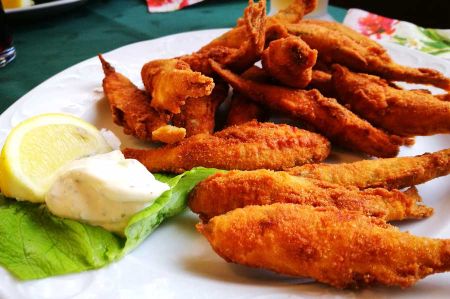 First, the shingled and gutted fish, still including head and tail, are drizzled briefly with lemon juice, dabbed and then seasoned with salt and pepper. Then they are rolled in very fine breadcrumbs. Then the Meefischli are baked floating in vegetable fat at 180 degrees for about five to ten minutes to golden brown color - alternatively, they can also be prepared in the deep fryer. It is important that the fish are very crispy, so that they can be eaten easily with head, fins and bones. The little ones have the privilege of swimming three times, another slogan says: first in the river, then in the fat and finally in the wine.

Of course, they are not found as often in the Main today as they used to be. The increase in predatory fish as a result of the improved water quality, but also the increase in herons and cormorants in Greater Würzburg have recently led to the decline of these fish, which in turn has led to higher prices. The cormorant has long since discovered that Meefischli are an absolute treat. It is estimated that 2500 of these birds live here in the region and everyone eats their 500 grams of fish a day - making 225 tons of fish during the season, which is lost to the human palate.

Meefischli together with white bread or potatoe salad 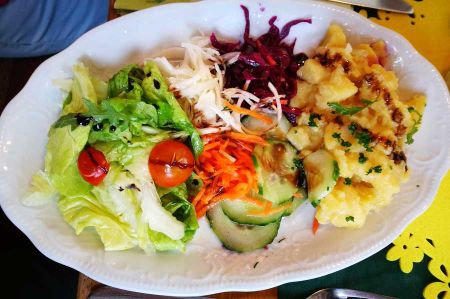 The fact that the Meefischli are certainly from native waters is simply a matter of honor and taste. Fortunately, there are a number of good fishing companies and pond keepers where you can buy fresh fish. The fisheries advisors of the district of Lower Franconia are pleased to inform you about further sources of supply. The district has also published a small booklet, from which we take the following recipe for the preparation of Meefischli:

For each person serving, mix eight to ten small arbors or roach, eight to twelve centimeters long, salt, pepper, fine bread crumbs, cooking oil, salt and pepper and season the shingled and gutted fish, toss in fine breadcrumbs, beat well and float in vegetable fat or bake oil at 180 degrees for about five to ten minutes until golden brown. The fish should be so crispy that the head, fins and bones can be eaten.

Meefischli with white bread are a good snack together with Frankenwein or are the prelude to a big fish menu. If you do not want to put yourself at the stove, restaurants are recommended that take care of the fish kitchen in a special way. For some years, the district of Lower Franconia has been honoring such houses with the "Golden Fish". The brochure of the district also provides information about this.

As a dish also with Grumbern salad, in the translation simply potato salad, see our photo. The preparation of Grumbern salad is extremely diverse depending on the region. The Franconian version of the potato salad is more of a purist variant, which for example dispenses with the addition of mayonnaise. Also some hints:

Boil potatoes of the same size (mostly hard-boiling variety) in salted water and peel them, then slice them lukewarm. Dice onions or shallots and add. Mix vinegar and half a liter of hot meat or vegetable broth and pour over the potatoes. Neutral edible oil (for example sunflower oil) should be mixed according to taste and texture. To garnish, sprinkle with chives as desired.

And now have a good appetite with your Meefischli!