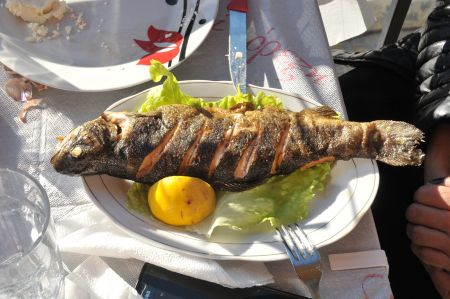 With Linda and Franc we had started from Shkodra in the direction of "Han i Hotit" to the north east of Lake Shkodra shortly before the border crossing to Montenegro, then followed the road to Kelmend, which is now newly asphalted and expanded until Tamara.

"Kelmend" is the name of the northernmost part of the Albanian Alps, a region formed mainly by two valleys: the deeply cut valley of the Cem and the valley of Vermosh in the northernmost tip of Albania. Fascinating deep down and surrounded by impressive rock formations, the only way to go to Tamara is still an experience.

The road, built in the late 1960s and early 1970s, is now asphalted until Tamara and the rest of the route continues to be built in the near future. Then the passage through the Kelmend Valley will be the shortest route between the Montenegrian town Plav and the capital Podgorica - if passes are snow-free. But more about that later.

Because of the seclusion in the north of Albania, tourists still rarely come to Kelmend and because of the quality of the roads, they cannot continue even to Theth and Valbona so far. We did the attempt ourselves and despite four-wheel drive we decided to use Tamara for the way back, probably because of the heavy rainfalls the road was not passable at the time. So we made an extended lunch break in Tamara with a short exploration, because there are also excellent hiking opportunities, impressive landscapes and excellent cuisine, as we could learn shortly afterwards in the form of a grilled brook trout.

Brook trout populate rapidly flowing, oxygen-rich, cool and clear waters with gravel or sand ground in almost all parts of Europe, including Albania. In almost untouched nature which provides creek water in drinking quality, the basis of life for the trout is perfect. If man kind also keeps number of taken trout in suitable amounts, means no over fishing, there is still little arguments left against a delicious brook trout meal. Brook trout are very site-abiding fishes, which leave their original place only for reproduction and also return to their original sites after disturbances. If these paths are not disturbed by man, a further point to the continuity of the trout is ensured. Ecological equilibrium and balance, as one today says, because the adult brook trout claims its own area. During the day it is hidden in the shadow, with its head against the stream.

Trout feed on insects, small fish, small creatures, snails and other aquatic animals, depending on their size and habitat. They are swiftly hunters, but they often take the chance of using passing food as a simple meal.

For thousands of years, the trout has been trapped by trout fishermen. The category of trout fishermen is another special species. We could observe this explicitly in the Franconian Switzerland, where there is even a school for fly fishing. However, high demand, particularly for trout, has led to over fishing on many rivers and streams. Environmental pollution and climate change have contributed to the fact that today most of the breeding brook trouts are from aquacultures. How wonderful is it then, if one once again could enjoy the taste of a wild grown brook trout. With fresh, homemade corn bread, homemade goat's cheese and fried potatoes we were served the grilled brook trout, the taste of which can be seen only by the photo. Simply delicious.

Valbona - mountain settlement in the valley of same name